Fan-filmed video footage of VOIVOD‘s October 3 performance at the Vintage Industrial Bar in Zagreb, Croatia can be seen below.

Completing the vinyl release of the five songs featured on the “Post Society” mini-album, “Silver Machine” includes the HAWKWIND cover version that serves as the EP’s title track as well as the song “Post Society”.

The “Post Society” EP was issued in February 2016 via Century Media. It was the follow-up to 2013’s “Target Earth”, which marked VOIVOD‘s first album of new material written without original guitarist Denis “Piggy” D’Amour‘s leftover riffs.

Langevin told Metal Wani about the musical direction of the next VOIVOD album: “It’s like in the vein of [the] ‘Post Society’ [EP]. So far, most of the songs are very long and progressive. We want to write a couple of short rockers to have a good blend, but so far, it’s very intricate and progressive thrash metal with a bit of punk, as usual. It’s still VOIVOD, it’s a newer VOIVOD, but I think the spirit is intact… I mean, there are elements of all the periods, for sure, and it sounds like the ‘Dimension Hatröss’ era, but it’s a new thing. [Bassist] Rocky [Dominique Laroche] and [guitarist] Chewy [Daniel Mongrain], they have their own way of approaching the music. They are really tight, surgical, so it makes me play differently. The thrash metal roots will always be there, except that we like to go into prog rock and psychedelia as well.” 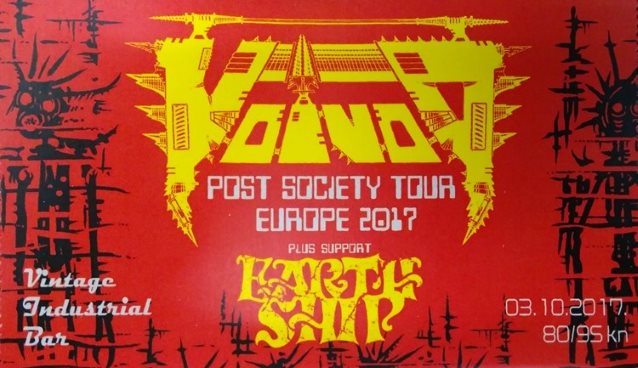