ALTER BRIDGE frontman Myles Kennedy has signed with Austria’s Napalm Records for the release of his debut solo album, “Year Of The Tiger”. The 12-song effort was helmed by ALTER BRIDGE‘s longtime producer Michael “Elvis” Baskette and will arrive in the spring.

Myles states: “I’m excited to announce I’m teaming up with Napalm Records for the release of my first solo record, ‘Year Of The Tiger’. This record is something I’ve always wanted to make and I’m grateful to Napalm for believing in me enough to get behind it.”

“Year Of The Tiger” was described by Kennedy in a recent interview with Metal Wani as “probably the closest thing to a full-on concept record that I’ve ever written. I mean, the story is congruent throughout the entire… It basically tells a story from start to finish, and it documents when my father passed away when I was a kid and basically what happened after that with my mom, my brother and I — it tells that story,” he said. “So it’s a full-on concept from start to finish.”

“Year Of The Tiger” is actually the second solo album Kennedy recorded, having previously completed a full-length record’s worth of material over a several-year period beginning in 2009. Although that album was mixed in early 2016, Myles “decided not to move forward” with the project because “I’m kind of a firm believer that songs can have a shelf life with an artist,” he told Metal Wani. “And what happened was I’d been chipping away at the solo record for quite a while when I had time. Obviously, I was very busy playing with ALTER BRIDGE and touring with that, but in my spare time, I was chipping away at this record, so when I actually documented it and finished it, I had to step back and look at it with a fresh perspective and say, ‘You know what? You’ve gotta be honest with yourself as a writer. Is this where you are now? No. And is this what you want to represent where you are now? No.’ That was a hard decision for me to make, because there was a lot of work that went into it. Not just work, but time and money, and I just felt like, regardless of that, I had to scrap and start over. So I started writing again late last year, early this year, and, fortunately, I had plenty of ideas to draw from.”

Kennedy eventually wrote a fresh batch of music for “Year Of The Tiger” but ended up “totally re-recording” one song from his scrapped first solo album. “I basically just used the demo [version of the track] and rebuilt around it,” he said. “So a few people [close to me] were happy to hear that, ’cause it was one of their favorites from that record. The content suited the record that I just completed, the ‘Year Of The Tiger’ record, perfectly, so it definitely will see the light of day this time.”

Asked how “Year Of The Tiger” compares to the musical direction of Kennedy‘s abandoned first solo disc, he said: “‘Year Of The Tiger’ definitely has much more of a blues-based vibe. Though I started the first record wanting to keep it more acoustically based… Sometimes you get in a studio and you have all these… With multi-tracking, with Pro Tools and all the toys available, it’s kind of like the sky is the limit as far as what you do from a production standpoint. So songs that started out very acoustic-based and very stripped down then grew into something different. So what I tried to be very aware of on ‘Year Of The Tiger’, and Elvis as well, my producer, was to kind of tie our hands and keep things limited as far as how many tracks we could use. We went straight to tape for the majority of the record. So it was really just the idea of ‘less is more’ and trying to take that approach to making the album.”

Saying that “Year Of The Tiger” sounds like “Myles Kennedy,” the ALTER BRIDGE frontman went on to reiterate that people “who’ve heard it have commented that there’s definitely more of a blues-based vibe on it. The instrumentation is certainly somewhat of a departure. I tried to veer away from any sort of high-gain wall of sound. There’s plenty of resonator guitar, mandolin… there’s even banjo, a lot of lap steel. So it’s definitely different from what I’ve done.”

“Year Of The Tiger” will feature a guest appearance by drummer Zia Uddin of THE MAYFIELD FOUR, a group Myles descries as his “first real national touring band” back in the late 1990s and early 2000s.

ALTER BRIDGE is continuing to tour in support of its fifth album, “The Last Hero”, which came out in 2016.

The group is expected to take most of 2018 off from the road while the bandmembers focus on other projects.

Writing for the follow-up to “The Last Hero” will begin next year, with tentative plans to release the effort in 2019. 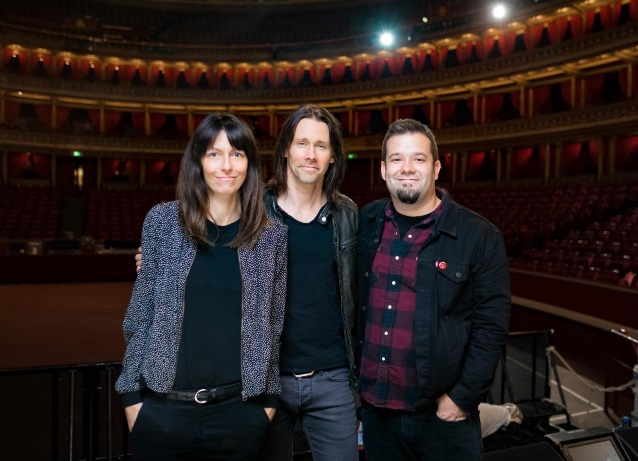