MANOWAR bassist Joey DeMaio will embark on “The Blood Of The Kings” spoken-word tour in November 2019.

DeMaio announced the event for every true MANOWAR fan only hours prior a sold-out concert in Munich, Germany.

For the first time ever, MANOWAR will open their secret archives so that fans can finally hear the official history of MANOWAR, from the very beginning until now.

Life on the road and in the studio; the glory and the battles; the secrets, and the triumph of steel — DeMaio unfolds “The Blood Of The Kings” chapter by chapter; live, onstage and in person, in a captivating one-man multimedia show.

“The Blood Of The Kings” spoken-word tour is a rare, personal look inside the exceptional career of one of the most iconic, most enduring bands in heavy metal.

General admission tickets for “The Blood of the Kings” spoken word tour 2019 Germany are now on exclusive pre-sale on Eventim.de.

“The Blood Of The Kings” spoken word tour dates:

The New York-based veteran metal act announced in May 2016 that it would call it quits after one last tour, explaining that its most recent trek — “Gods And Kings” — was a groundbreaking moment in the band’s career and the group aimed to go out on a high.

MANOWAR singer Eric Adams, whose real name is Lou Marullo, spoke about the group’s’s final trek in a recent interview with “Outdoor Adventures With Jayson”. He said: “This is it. We’ve got one last tour coming up. As far as I know, it starts in November in Scandinavia. And then we head down to Germany in December. I fly home for Christmas around December 18, somewhere in there. And then I don’t know where we go after that. But it will continue for a little while after that; I just don’t know where yet. So I’m looking forward to that.”

The 63-year-old singer admitted that it was “kind of a Catch-22 thing” knowing that he would never perform with MANOWAR again. “I’m gonna miss the big stage — of course I am — but all good things have to come to an end at some point,” he said.

As for his future plans, Adams said: “MANOWAR has decided to call it a day, and who knows what’s gonna happen after that? I might continue to sing. I might just grab my bow and get out in the woods a little more often than I did before. But we’ll see. The future’s still yet to be told.”

Eric, who describes himself as “a big-time bow hunter,” has been a hunting-safety instructor for the state of New York where he teaches new hunters about the game laws in New York. He is also the hunting editor for Texas Fish & Game magazine.

MANOWAR‘s most recent studio effort was 2014’s re-recording of the band’s 1988 album “Kings Of Metal”. 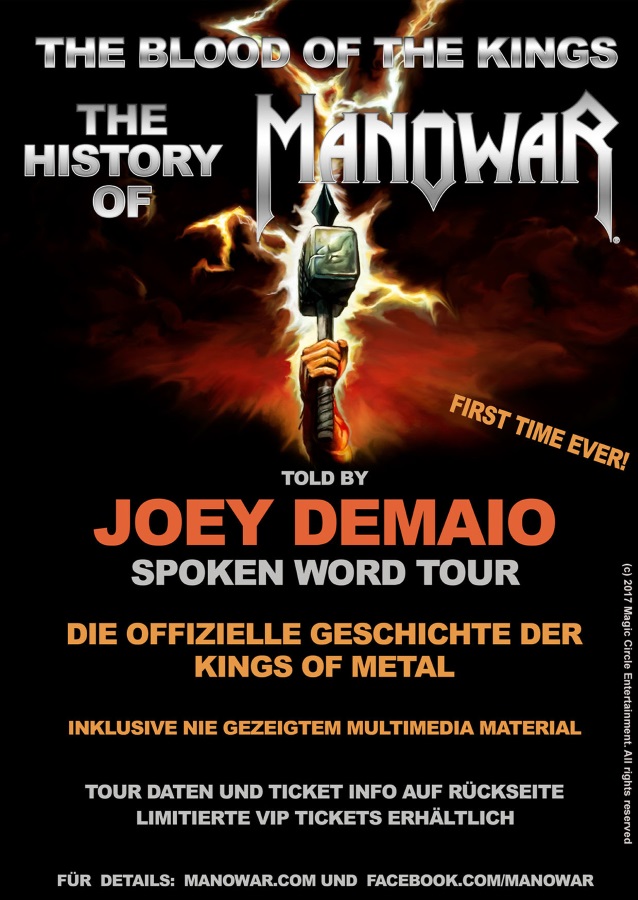