Fan-filmed video footage of ex-QUEENSRŸCHE and current OPERATION: MINDCRIME singer Geoff Tate performing his former band’s classic song “Suite Sister Mary” on January 15 at the Garage in London, England can be seen below. Tate, who is celebrating the 30th anniversary of QUEENSRŸCHE‘s “Operation: Mindcrime” album on his current European tour, was joined for the performance by his 20-year-old daughter Emily, whose band TILL DEATH DO US PART is the support act on the entire trek.

Tate told “Totally Driven Radio” last month about his daughter: “We haven’t sung together on stage since she was a little kid and joined me on [the QUEENSRŸCHE] album [and] tour called ‘American Soldier’, and she sang a song with me. And that was, like, 2009 or ’10 — something like that. So she’s all grown up now. And she has a band called TILL DEATH DO US PART, which is a fantastic band, and they’ve got a new album out, and they’re gonna be opening the shows for us.”

Asked if he tried to encourage his daughter to get involved in singing or steer her away form the music business altogether, Tate said: “She was really into music as a kid. And she came to me one day and she said, ‘Can I play the music in your collection?’ And I said, ‘Yeah. Just take whatever you want.’ And she took it all — she took all the albums I had and just went through everything. She got this A-to-Z history of rock and just absorbed it all. And then when she was nine, I asked her to sing this duet part with me on a song called ‘Home Again’ on the ‘American Soldier’ album. And it was great working with her; she really was a very eager learner. And then she went on the road and toured America with me on that tour. And then, you know, I didn’t think anything past that; she didn’t make any more moves as far as being a musician. And then about, I think it was last year, I was sitting in my living room reading the newspaper, and she walked in and she goes, ‘Hey, you wanna hear my new CD?’ And I thought she meant something she bought. [So I said], ‘Oh, yeah, sure.’ She tosses me the CD and I look on the cover and it’s her face. I go, ‘You made a CD?’ [Laughs] She goes, ‘Yeah. This is my first album. Listen to it and tell me what you think.’ So I had no idea she was making this record — she didn’t tell me about it. And so I put the record on and I was really surprised — it’s great; it’s really good stuff. So I’m having her come out and tour Europe with me this year, so I’m looking forward to that.”

Geoff went on to say that he was “really happy” Emily made the TILL DEATH DO US PART album without seeking his input or even letting him know she was working on it. “It’s her own stuff, it’s her own art, and she didn’t feel like she needed to ask my permission or my direction on it; she just followed her heart,” he said. “And, to me, that’s the most honest art there is — when you make it yourself. And she did that. She didn’t come [to me] and say, ‘Hey, can you write a song for me?’ Nothing like that; it was all her. So it’s really her own effort and her own viewpoints and her own perspective on the world, which I really respect.”

“Operation: Mindcrime” is the third studio album of eleven that Geoff recorded with QUEENSRŸCHE. The concept album and rock opera is a story following Nikki, a recovering drug addict, who becomes disillusioned with the corrupt society of his time and becomes involved in a revolutionary group, acting as an assassin of political leaders. The certified platinum album was rated by Kerrang! as one of heavy metal’s top 100 albums of all time.

QUEENSRŸCHE played “Operation: Mindcrime” in its entirety during the band’s 1990 tour to promote the “Empire” album. The performance featured video, animation and guest singer Pamela Moore as the character Sister Mary.

Tate was fired from QUEENSRŸCHE in 2012. He has since been replaced by former CRIMSON GLORY singer Todd La Torre. 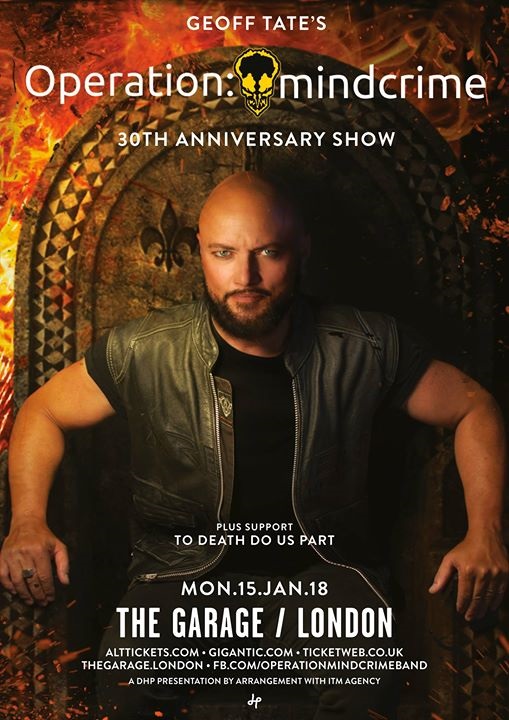