Fan-filmed video footage of SAXON‘s February 24 performance at Corn Exchange in Cambridge, England can be seen below.

SAXON will be the primary support act for JUDAS PRIEST‘s “Firepower” tour, which will kick off on March 13 in Wilkes Barre, Pennsylvania and will wrap on May 1 in San Antonio, Texas. Additional support on the trek will come from BLACK STAR RIDERS.

SAXON frontman Biff Byford told Dead Rhetoric about the upcoming tour: “I suppose we were out with JUDAS PRIEST and MOTÖRHEAD in 2015 for a few shows in North America — we’ve done fairly good gigs with them. But there’s nothing like having a fantastic package together for the fans. You have to remember that when it comes to SAXON, the fans are the most important thing to us, especially when we are touring. We just feel that this package — especially JUDAS PRIEST and SAXON — is iconic. The first tour we ever did in Europe was with JUDAS PRIEST in 1980, so we’ve been friends with them ever since. The three bands are a great bill for the fans to see, the people seem really excited about the new album and about the tour, so we are looking forward to it.” 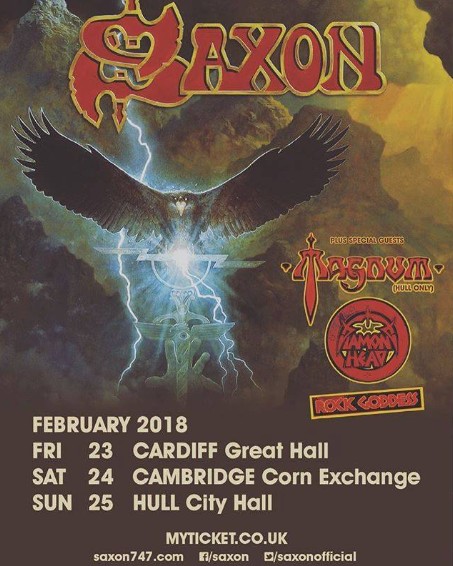