We’re talking about the iconic and exhilaratingly colorful packaging of Ernie Ball’s Slinky guitar strings — each vibrantly designed pack representing a different string recipe/gauge. For more than 55 years, the biggest names in music have used Ernie Ball Slinky Pinks, Purples, Greens, Reds, Oranges and Blues to write, record and perform some of the most important songs in rock history.

The Southern California-based Ernie Ball has a history of collaborating with notable artists, including Luke Cheuh and The Pizz. The original Ernie Ball font and design elements were created by the legendary Roland (Rolly) Crump, a high school classmate of Ernie‘s who went on to work on classic Disney films, then later designed some of Disneyland‘s biggest attractions.

“It was a bit intimidating to find that out,” laughs Draplin. “We talked about me adding something to the Ernie Ball legacy — delicately. The idea behind the design is that you open a pack and the color explodes from it. We wanted it to speak to the players who use those specific colors. I remember my uncle taking me to buy my first guitar. He said, ‘You need to get strings,’ and I’ll never forget how I felt looking at the colors and the typeface of the Ernie Ball packs. They screamed rock and roll at me. And the design feels as visceral now as it did that day in the store. In an attempt to get a competitive edge, brands are always forced to change and update and Ernie Ball has always stuck to its guns. It’s like, ‘This is who we are and these are our colors.’ That’s pretty cool.”

“My father was a pioneer,” says Ernie Ball CEO Sterling Ball. “He invented the famous Slinky string recipes and gauges that have been the standard for guitarists worldwide for more than 55 years, and his vision for the iconic illustration and neon packaging has been the cornerstone of our brand ever since. They remain the colors of rock and roll and Ernie would be proud to know that his legacy endures and that the most influential guitar players in the world continue to play his strings to create their own enduring art.”

An equally important part of the celebration is the announcement of the 2018 Slinky “Back Of The Pack” list — one of the most sought-after achievements of guitar players worldwide, spotlighting a who’s who list of rock and roll. The lineup is updated annually and today Ernie Ball has revealed a new list featuring 162 of the company’s most influential guitarists, multi-platinum artists, Grammy winners and exciting new voices ranging from Paul McCartney, Pete Townshend, Steve Vai, John Mayer, METALLICA‘s James Hetfield and Kirk Hammett and Slash, to St. Vincent, Mac Demarco, Courtney Barnett, Ryan Adams, and The War On Drugs, among many others. This all-star lineup is featured on the flip side of each pack, which now comes in a brand-new metallic packaging.

“Our family of artists are as important as our industry leading innovation,” says Ernie Ball president Brian Ball. “We’re backed by the best and excited to announce our 2018 back of the pack list, which can be seen here.” 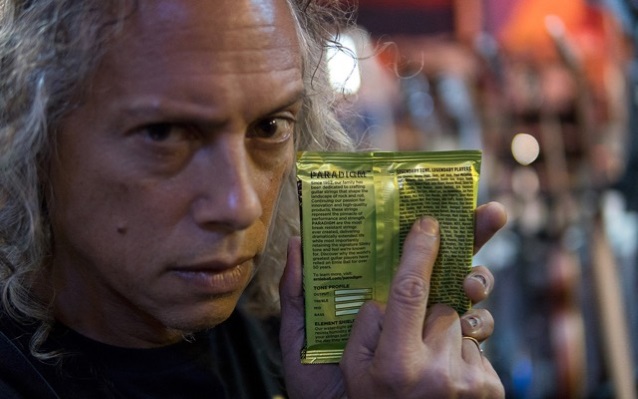 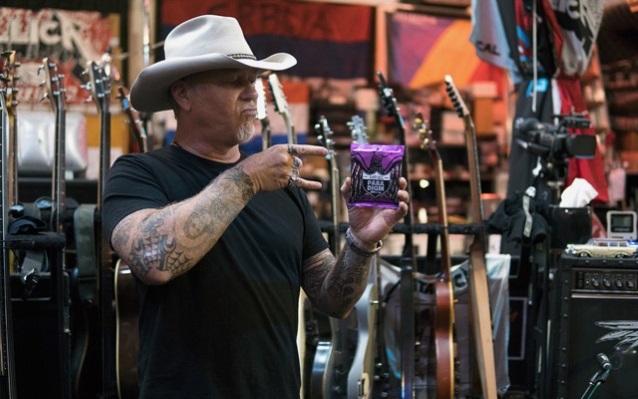