DIMMU BORGIR Frontman On Eight-Year Gap Between Albums: 'We Were Feeling That We Were Losing A Little Bit Of Our Identity'
{$inline_image}
Vocalist Shagrath of Norwegian black metallers DIMMU BORGIR recently spoke to Lords Of Metal about the eight-year gap between the release of the band’s last studio album, “Abrahadabra”, and the arrival of the follow-up effort, “Eonian”. He said: “[It’s] strange to have been away for quite some time; it feels kind of weird somehow. I have mixed feelings about it. We have not been lazy, though.

“It has been almost eight years now since the previous record, but you have to remember that we have toured up until 2014,” he continued. “It has been a world tour and festivals, many different stuff. It seems many years, but after the last gig in 2014, it was important for us to stop the train a little bit — to get off that train, take a break and reflect a little bit about the history of the band. We were feeling that we were losing a little bit of our identity. We were working with a lot of people and we felt like we needed to stop and take back the control of the band. We had to change our management, we had to re-sign our record deal with Nuclear Blast, we had to reflect on all sorts of communication and a lot of time passed. On top of that, we all have families. We all have kids within the band. Three kids have been born since the previous record: me, Silenoz [guitar] and Daray [drums] have become fathers, and, of course, family life, it takes time, and you have to find a balance between the musical scene and personal life. But it was important for us to take a little break and we are sorry to the fans, of course, because we did not want to disappoint out fans, but it was important to take a little break.”

According to Shagrath, DIMMU BORGIR took as much time as was needed to come up with a worthy successor to “Abrahadabra”.

“We kind of wanted a fresh new start and [to] recharge our batteries,” he said. “Approximately three years ago, we decided… We had a meeting in a cabin for a weekend and discussed a bit what we were going to do. We decided that we would make another record. During the break, we still had contact, but not so often as we probably would have had [if we had decided to] just carry on. We needed some isolation between us to recharge and reflect. We agreed to go back to the pre-production studio and see if we could write some songs and what we could come up with. So we started writing and it was a bit strange, because we were starting with a blank page and we did not know what kind of direction we should go, but we all agreed that we would step back a bit from the grotesque symphonic works we had done, because we used so much orchestra on the previous record. So after the release of the ‘Forces Of The Northern Light’ DVD, that was like a chapter closed. We are done with that chapter now. So we wanted to start focusing more on creating songs that are more guitar-oriented. So we took it from there and the first song we created for this record was ‘Archaic Correspondence’, which is track number eight. It went smooth, actually. It was a little bit challenging in a way that you feel a pressure. We were thinking: ‘Where do we take it from now? What shall we do?’ But we had to close the world out and not think about opinions and try not to think so much about what we were doing. We wanted to focus on what comes from the heart. So that’s what we did. When we had made the first song, it was easier to take step number two and three; the rest followed quite smoothly. You are in a bubble when creating songs, you know… That’s what we did, and it was important for us to not have any pressure. We really took all the time and attention that was needed, and I think that also reflects on the record. We put a lot of effort and time in every song on this record as a whole, and that was important too, because in the past we stressed a lot about the deadlines — like, ‘Now it is only three weeks to go in the studio.’ Then the result can be bad, but this time, we said, ‘Let’s do an album and when [the writing] is done, we will call the studio and record.'”

“Eonian” will be released on May 4 via Nuclear Blast. The disc contains 10 new tracks produced by the band itself and engineered by Jens Bogren.

DIMMU BORGIR will embark on a short U.S. tour in August. The four-date trek will kick off on August 19 at the Psycho Las Vegas festival in Las Vegas, Nevada and conclude six days later at the PlayStation Theater in New York City. 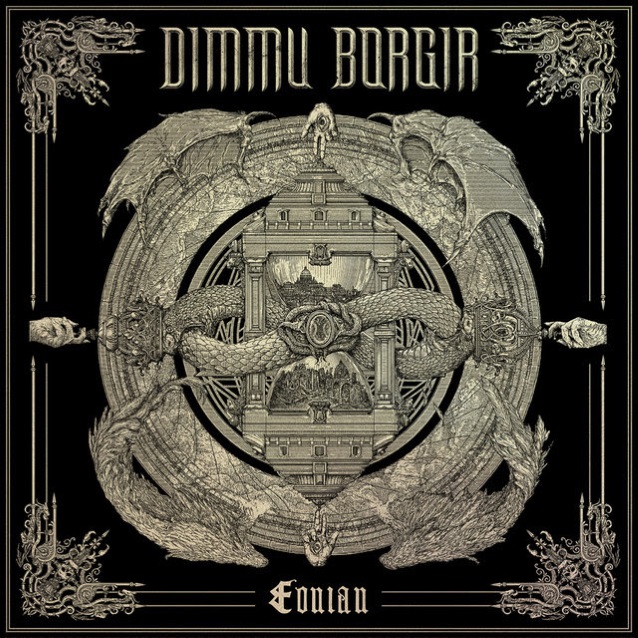 DIMMU BORGIR Frontman On Eight-Year Gap Between Albums: 'We Were Feeling That We Were Losing A Little Bit Of Our Identity'
Tagged on: HRRL
tom lats April 25, 2018 Rock News No Comments