STRYPER played its first show with new bassist Perry Richardson (ex-FIREHOUSE) Saturday night (April 28) at the Frontiers Rock Festival in Milan, Italy. Fan-filmed video footage of the performance can be seen below.

STRYPER frontman Michael Sweet stated about the gig: “Although we had a few technical difficulties, it was an amazing night!! The people of Italy are beautiful and we hope to return soon. We want to thank everyone who traveled so far to see the show as well!!

“The band did an outstanding job and specifically Perry. He had an entire set to learn (20 songs) and he absolutely nailed it!! The harmonies, the playing and the vibe.

“We’re looking forward to hitting the road in a few days in support of our new album. We hope to see all of you at the shows coming up. It’s going to be the best year yet.”

STRYPER‘s new album, “God Damn Evil”, was released on April 20 via Frontiers Music Srl. The follow-up to 2015’s “Fallen” marks the band’s first effort since the addition of Richardson. Perry joined the band as the replacement for STRYPER‘s longtime bassist Tim Gaines, who was fired from the group last year.

Perry did not play bass on STRYPER‘s new album due to scheduling constraints. The bass tracks on “God Damn Evil” were laid down by John O’Boyle, who played bass on Sweet‘s last two solo albums.

Sweet told AXS about how Richardson came to join STRYPER: “Perry‘s name came on our radar from Dave Rose, who co-manages us. We flew him out and instantly fell in love with him. He’s the real deal. A nice, humble guy who brought something into the band that hadn’t been there in a while. He has such a high level of joy and peace. Then, when we heard him play and sing, we were floored. We’re so blessed to have him. We’re excited about Perry performing on the next album and singing as well.” 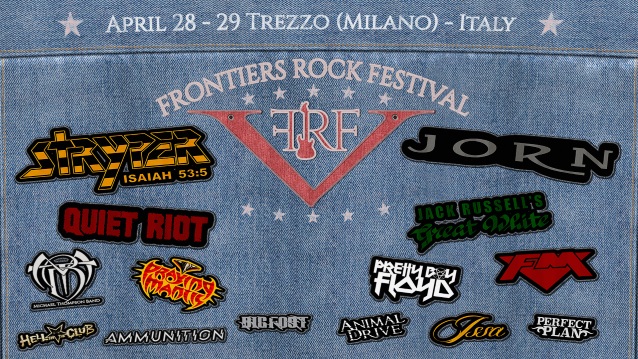