“Our new album title, ‘God Damn Evil’, is a statement that’s needed in our society. We’ve seen evil rise to new levels and this title is simply a prayer request asking God to damn or condemn all the evil around us. Many chains have joined us in making such a statement. Walmart, unfortunately, has not. The odd thing is of all the chains out there we assumed Walmart would be one to understand exactly what our point and purpose is. Unfortunately not. Although we respect their decision and what’s done is done, it’s frustrating to see something that’s meant for good get misinterpreted and misunderstood.”

After the openly Christian group announced it was calling its new disc “God Damn Evil”, a number of people within the Christian rock and metal community went up in arms, accusing STRYPER of having gone too far.

Asked by All That Shreds what made STRYPER choose such a seemingly provocative title for its follow-up to 2015’s “Fallen”, Sweet said: “We didn’t do it just to shake things up. We have a point to prove in a statement. A few years back we thought about using this title. We didn’t go with it because we felt it was a little too much at that time. Now in 2018, with everything that we’ve seen on the news, the evil we’re faced with on a daily basis to new levels and new degrees, it made perfect sense for us to have an album called ‘God Damn Evil’. It’s a prayer request. It is what it is. It’s not a swear, it’s not just the shock statement, it’s a prayer request, and we’re asking God to damn the evil that we see. It should be a prayer for everybody. Some people are freaking out thinking you’re taking the Lord’s name in vain, and it’s not that at all.”

In a press release announcing the release of “God Damn Evil”, Sweet explained that he and his bandmates “thought long and hard about this title. It was actually considered quite a few years ago and it just didn’t feel like the right time. Now, with all the evil in the world that we see around us on a daily basis, it made perfect sense. It’s a very bold statement yet a prayer asking God to damn/condemn evil. Nothing more, nothing less.

“We all see and hear the darkness that surrounds us in our society, but with faith and love, we’ll always have hope,” he continued. “That’s what STRYPER is all about: powerful music and a message that builds foundations, not walls. We couldn’t be more excited about ‘God Damn Evil’, as it showcases our undying love for what we do and why we do it.”

“God Damn Evil” will be released on April 20 via Frontiers Music Srl. The CD marks the band’s first effort since the addition of former FIREHOUSE bassist Perry Richardson. Perry joined the group as the replacement for STRYPER‘s longtime bassist Tim Gaines, who was fired from the band last year.

Perry did not play bass on STRYPER‘s new album due to scheduling constraints. The bass tracks on “God Damn Evil” were laid down by John O’Boyle, who played bass on Sweet‘s last two solo albums.

STRYPER will return to the road this year, kicking off the “God Damn Evil” world tour in Milan, Italy on April 28 at the Frontiers Rock Festival. 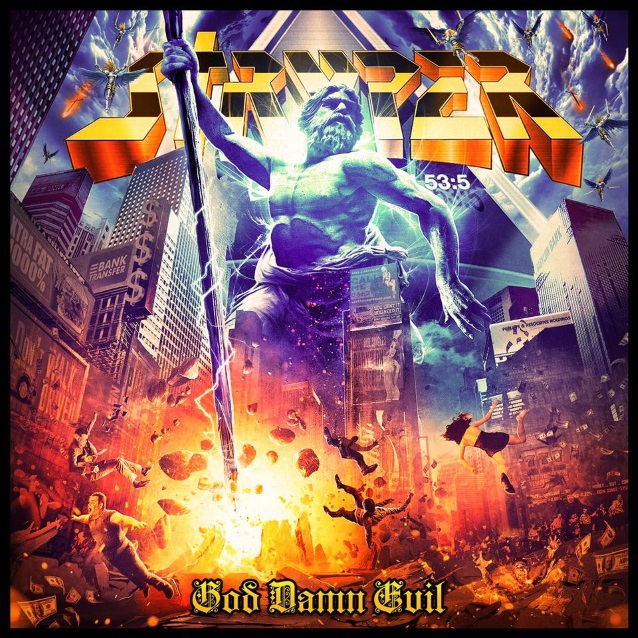