BILLYBIO, the new solo band from Billy Graziadei (BIOHAZARD, POWERFLO) will be main support on LIFE OF AGONY‘s upcoming “Rise Of The Underground” European tour. Billy‘s set will include brand-new music from his first-ever solo album along with a couple of BIOHAZARD favorites.

“I’m psyched to release my new music this fall as BILLYBIO,” said Billy in a statement. “Launching the band in Europe on tour with my family in L.O.A. couldn’t get any better! We shared childhood memories and grew up more in our teens, seen hard times and broken dreams and we are all still doing what we love…. That’s what it’s all about… I can’t wait to take this on the road! More news to follow on the release.”

Added LIFE OF AGONY bassist Alan Robert: “We just finished the West Coast leg of our ‘Rise Of The Underground’ tour with POWERFLO and had such a great time out there with them. Billy is like family to us, so to see him every day and to jam on old songs we all grew up on together is going to be so much fun. It’s definitely going to be something really special and not to be missed. Not just for us, but for anyone who grew up in the old scene.”

POWERFLO‘s self-titled debut album was released in June 2018 via New Damage Records. A follow-up EP, “Bring That Shit Back”, arrived earlier this month.

BIOHAZARD has been largely inactive since frontman Scott Roberts left the band in February 2016.

Roberts, who played guitar on BIOHAZARD‘s 2005 album “Means To An End”, rejoined the band in June 2011 as the replacement for bassist and co-vocalist Evan Seinfeld. Scott fronted BIOHAZARD for nearly four years before exiting the group. 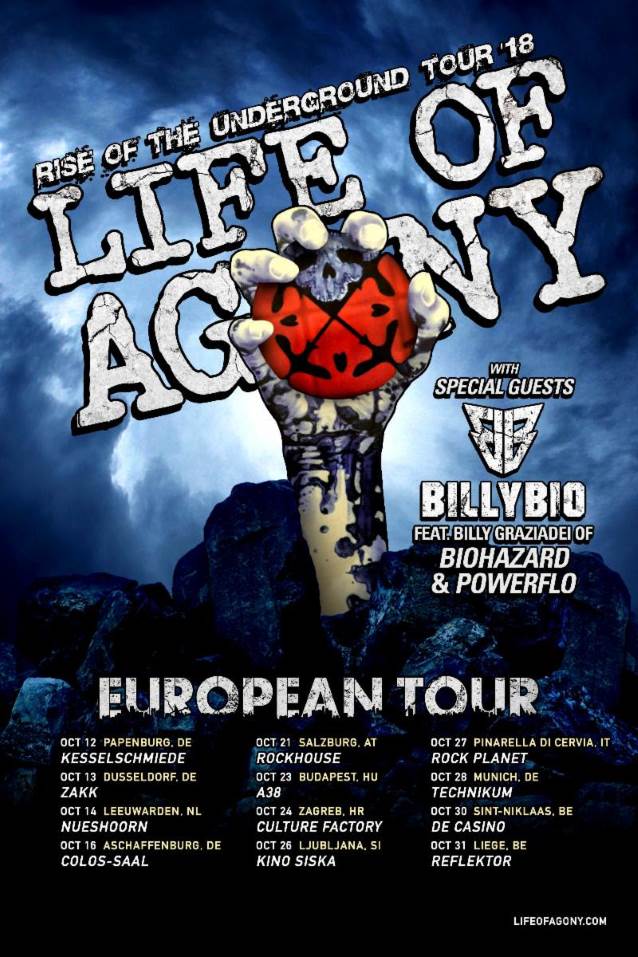