MEGADETH's DAVE MUSTAINE: 'I Never Release Records To Take Advantage Of The Fans'

Mustaine made his comments while promoting the 2018 deluxe reissue of MEGADETH‘s classic debut album, “Killing Is My Business… And Business Is Good!”

Released on June 8 via Century Media and Legacy Recordings, “Killing Is My Business… And Business Is Good – The Final Kill” features the original album remixed by veteran metal mixer Mark Lewis (WHITECHAPEL) and remastered by Ted Jensen.

In addition to the full album, the new package includes seven live audio tracks from VHS tapes found in Mustaine‘s own attic, as well as MEGADETH‘s 1984 three-track demo and the once-removed cover of Lee Hazlewood‘s “These Boots Are Made for Walkin'” that has been added back to the record with recut vocals intended to maintain the integrity of both the original song and MEGADETH‘s own rendition. The package is further enhanced by a new album cover featuring a fully executed sculpture of the iconic skull that has been lost over the many years since the album’s initial release. The packaging also includes classic flyers and band photos pulled from their archive of metal moments from MEGADETH‘s 35-year history.

When Sakis Fragos, publisher/chief editor of Greece’s Rock Hard magazine, suggested during a recent interview that reissuing “Killing Is My Business… And Business Is Good!” four times is “kind of unfair” for the MEGADETH fans who bought the previous versions of the album, Mustaine said: “I wasn’t the one who decided [to re-release it once again]. These are things that come from the record company, and when a record company wants to do a release, there are a lot of things involved with it that the public doesn’t know. Sometimes in order to enter into a new record deal with a new record company, they’ll say, ‘We wanna sign a record deal with you. We’ll take your new music and we wanna put this one out; we wanna re-release it. That ain’t up to me. And you know what? I’ve gotta tell you — I’m offended that you said that you think it’s unfair that we did that. I never release records to take advantage of the fans. If you know me, you know I don’t do that.”

Mustaine went on to say that part of the reason he wanted to see “Killing Is My Business… And Business Is Good!” re-released is to bring the album’s production up to date.

“When I was in the studio [making the original album], two guys walked in that were responsible for burning up half of our recording budget,” he explained. “And David Ellefson [MEGADETH bassist] and I were left looking at each other, like, ‘Can you believe that this just happened?’ So for us to get an opportunity to go back in today and to do the record again with the technology today, for new fans that listen to bands like SLIPKNOT and FIVE FINGER DEATH PUNCH — that’s what they believe thrash and speed metal and hardcore and all that stuff kind of sounds like; not the songs, but the tone of it. So for us to get a chance to go back in and make this record sound good, who wouldn’t wanna do that?”

Mustaine added that he understands why some people would think it was “unfair” of MEGADETH to re-release an album that has already been made available three other times in different versions. “You saw the way I reacted [to you saying that] — I was hurt, ’cause I don’t want anybody to think that,” Mustane told Fragos. “And that’s exactly what happens when record companies do that. So that’s why we put so many extra songs on there, so that the fans wouldn’t think what you said. So we put numerous live versions on there, from one lineup and from another lineup and from another lineup — just versions and versions and versions — so that people wont’ go, ‘Fuck! I bought three of these, and now I have to buy four.’

“If it was my way, I think that the record companies have gone through so many different changes, they’ve made the fans so angry with changing formats, going from vinyl to cassette to DAT to CD,” he continued. “And now I hear that the CD is gonna be going away. What about the guy that can’t afford a fucking stereo and just buys a CD player and then we find out that CDs are gonna be gone? Great. So I have my own problems with putting out records and stuff. I joined The Recording Academy for the Grammys out here in Nashville, so that I can join… ‘Cause I don’t like the fact that they only have one category for heavy metal. And one of the things that we’re doing is a group of us went up to Capitol Hill to fight so that musicians will get paid right. Because all the streaming stuff, the artists aren’t getting paid right. So that’s kind of where my head’s at. It certainly isn’t to take advantage of you, brother — I promise you that.”

“Killing Is My Business… And Business Is Good – The Final Kill” track listing: 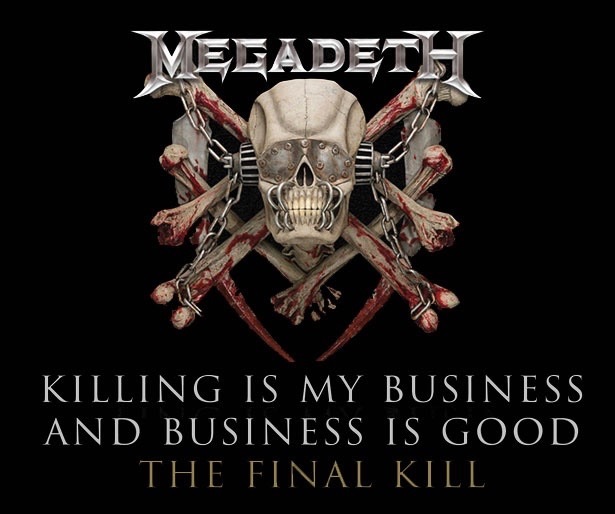