Finnish metallers BATTLE BEAST will release their fifth album, “No More Hollywood Endings”, on March 22, 2019 via Nuclear Blast. The 11-song disc was recorded by keyboardist Janne Björkroth, Viktor Gullichsen and guitarist Joona Björkroth at JKB Studio. The production and mixing duties were handled by Janne. The cover artwork was created by Jan Yrlund (KORPIKLAANI, MANOWAR), who previously worked with BATTLE BEAST on 2017’s “Bringer Of Pain”.

Janne stated about the forthcoming record: “The heavy songs are heavier, pop delights brighter, rock vibes stronger,and sounds richer than before. The emotional scale is wider, and everything is bigger. Stay tuned for 2019!”

BATTLE BEAST singer Noora Louhimo told Metal Casino about the musical direction of the band’s next disc: “We’re gonna keep the same spirit as on the previous album. With the previous album, we learned a lot what we wanna do with our music, so it’s gonna be maybe even more epic [laughs] than the last time.”

Noora also talked about how the songwriting process has evolved since the band’s split with longtime guitarist and main songwriter Anton Kabanen and addition of Joona Björkroth. “It has changed a lot, or totally,” she said. “Of course, different songwriters. The previous album, the whole band wanted to contribute, and now after we had Joona in the songwriting process and kind of changed the whole dynamics in the band, we contributed, the whole band, in the songwriting process. I think it was… Not just because of the songwriting, but also the atmosphere nowadays, I think, it’s very healthy and we like each other and I love to work in this band. And I think it’s great to have more than just one person doing the songwriting and giving the opinions. Of course, someone has to say, ‘Okay, this is the decision,’ and not everyone can just decide about everything. But we also have to do compromises, because we are six people, six different opinions. But I think we are already on the way to see everybody’s… who can do what in the band. I feel like my priority is to do the good vocals and performance and visual things, and I can happily leave songwriting to our most productive guys, like Janne and Joona — they have been so productive. And also our bass player, Eero [Sipilä], has written a few songs. So we are in a good place.”

“Bringer Of Pain” was BATTLE BEAST‘s first album to feature Björkroth, who joined the band in 2015.

BATTLE BEAST in February 2015 parted ways with Kabanen due to “insurmountable disagreements” with the other members of the band. 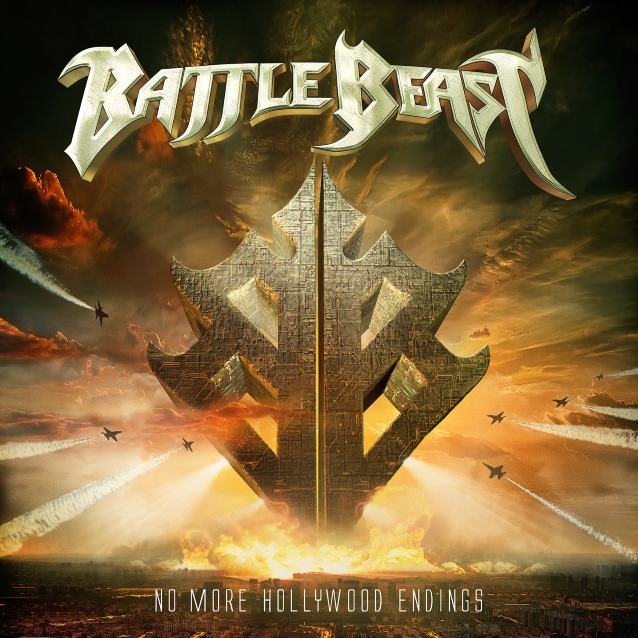