“Dimebash” will feature performances by KILL DEVIL HILL and FIREBALL MINISTRY, followed by an all-star jam featuring members to be announced performing Dimebag‘s music and his favorite tunes.

Doors open at 7:00 p.m. and the all-ages event starts at 8:00 p.m. Tickets are available now via Ticketweb.

A private afterparty will take place after the main event featuring Dave Grohl‘s BackBeat BBQ cooking up a monstrous feast for all in attendance, and tons of great raffle prizes will be available to win throughout the night. Details on how you can win a seat at a private afterparty table are coming soon.

For both events, all proceeds will benefit MusicCares and Guitars For Vets.

Dimebag‘s longtime girlfriend Rita Haney says: “The thing that I look forward to most about ‘Dimebash’ is how it doesn’t matter if you’re up on the stage jammin’ or if your standing in the crowd — we’re all just one big bunch of fans together, here to pay our respects to the same man for the love, the laughs, and the killer tunes he created with that power groove of his! Lots of fun is had in that room on that one night – you never know the combinations of talent you’re going to see! It’s pretty damn magical!”

Dimebag was co-founder and lead guitarist for PANTERA. When PANTERA broke up in 2003, Dimebag and his brother Vinnie Paul formed DAMAGEPLAN. On December 8, 2004, while performing with DAMAGEPLAN at the Alrosa Villa in Columbus, Ohio, Dimebag was shot and killed onstage. He was 38 years old. 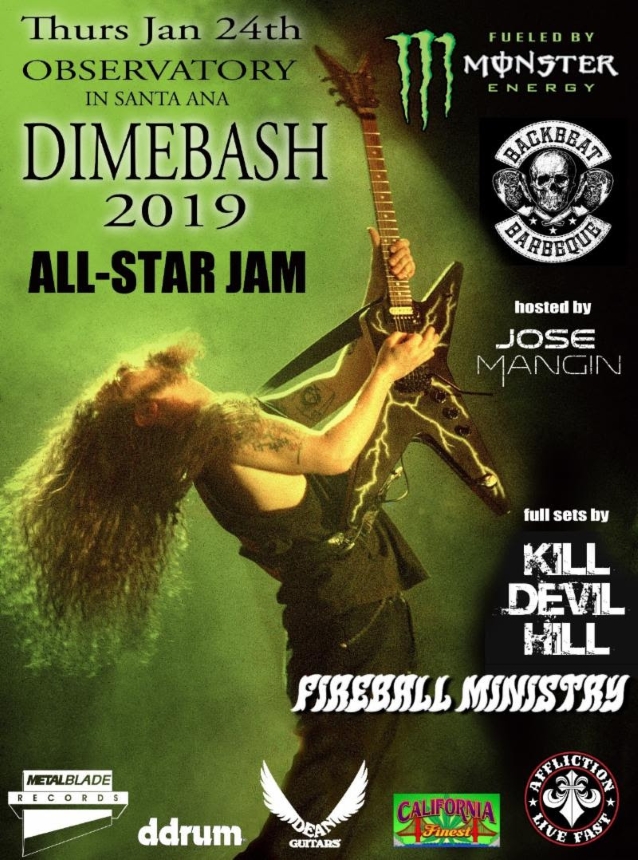