Vocalist Mike Muir of Venice, California crossover thrash/hardcore punk legends SUICIDAL TENDENCIES spoke to the KLOS radio show “Whiplash” about the band’s Converse collaboration. The Converse x Suicidal Tendencies collection is a collection of Chuck 70’s and accompanying apparel based on digital and screen-printed graphics in the classic style of Ric Clayton, who designed posters and fliers for the band back in the ’80s.

Asked by host Full Metal Jackie what was the most important thing that needed to happen for him to agree to the idea of a collaboration with Converse, Mike said: “When I was 12 years old, I remember the first pair of Chucks I got. And, to me, what they represent is a very cool thing. It’s what I wore. And besides that, fortunately, a lot of people that actually work there now, I didn’t even realize it, but I knew from other places that ended up being there. It’s a really good atmosphere, and they get what the band is about. And it was one of those ones where, you know, they talk as a business and they have to do their business things, but they go, ‘This is something that we think is really important.’ And when you get a call from the GM or something, they’re like, ‘We really want to do this.’ Everybody says they don’t like to do things they don’t like to do, but they go, ‘This is something we’d be really proud of.’ And it’s something I’m very proud of.’

He continued: “It’s cool, because, even when I got the samples, I didn’t tell anybody, ’cause it’s one of those ones where you don’t need to tell anybody. But we got the sample. On the one side, it has the SUICIDAL circle logo, and people look at it, like, ‘Oh that’s cool. It’s kind of like a Converse rip-off.’ And then we turn around to the other side and they see the Converse logo on it, and they’re, like, ‘What? What was that?’ And, like I said, I didn’t really tell anybody, but the day that they announced that it was coming out, I got so many calls and texts and e-mails from people that I haven’t talked to in a long time. They were, like, ‘Dude, I just saw that. That is so cool. [I’m] so happy and proud. Proud for SUICIDAL, proud for everything.’ And they’re, like, ‘Dude you nailed it. I just wanted to say that.’ So, that was amazing — something I never even expected.” 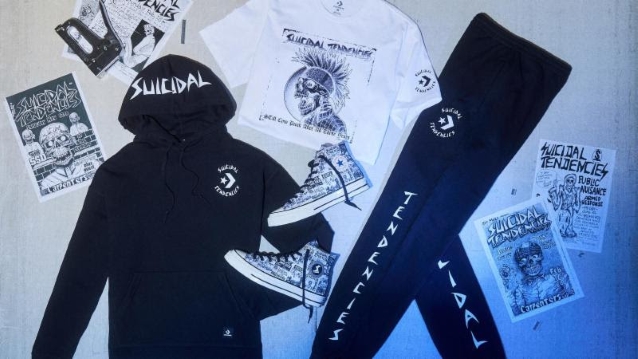