Former MACHINE HEAD and VIO-LENCE guitarist Phil Demmel played his third show with SLAYER Thursday night (December 6) at Spektrum in Oslo, Norway. Fan-filmed video footage of the concert can be seen below.

Demmel is filling in for SLAYER‘s guitarist of the past eight years, Gary Holt, who announced last Sunday that he would miss the rest of the current SLAYER European trek in order to return home and be with his dying father.

Asked how he was approached by SLAYER to step in for Holt, Demmel told Metal Casino: “I wrapped up the MACHINE HEAD tour — I quit MACHINE HEAD, did our last show — and the next day I got a text from Kerry King [SLAYER guitarist] saying, ‘Do you think you can learn 19 SLAYER songs and be out here in two days?’ So, my wife had been at home with our son and running our business, and I had been gone for two months. And I showed her the text. She was so happy to have me home. So I showed her the text, and she had said, ‘You’ve gotta go. You have to go do it.’ So I started studying [the songs] on the plane. And I came out and played my first show [Monday] night [in Copenhagen, Denmark].”

According to Demmel, the Copenhagen concert “so, so cool” and “so exciting… It was amazing,” he said. “I had so much fun. I felt so honored to be able to do this for Gary and for the band. Very exciting stuff.”

Asked if he was already familiar with most of SLAYER‘s music or if he had to spend a lot of time learning how to play the tunes, Demmel said: “There was songs that I knew, but I didn’t know every little part, and I had to figure out what part is Gary‘s and how they do it live now. So it was a lot of work — it was a lot of work — but it paid off. I killed it. I got it done. Very exciting.”

Phil said that the reception from the Copenhagen audience was overwhelmingly positive. “I had to concentrate on what I was playing, so I’d look up every once in a while [and see the crowd],” he said. “Scott Ian [from support band ANTHRAX] was just saying that some of the guys were running back: ‘It’s his first night, and he’s yelling at the audience.’ So, yeah, I was feeling it. Sometimes I tend to smile onstage, and there’s no smiling in SLAYER. You can’t smile onstage. So, yeah, I felt very welcomed by everybody.”

Demmel credited SLAYER with inspiring him to form VIO-LENCE, a band which played a major role in the rise of the 1980s Bay Area thrash metal scene.

“So, yesterday was the 35th anniversary of the first SLAYER record coming out… And I saw them back in 1983, one of their first shows up in the Bay Area,” he said. “They were the reason why I play heavy music, and so to be able to… I’ve got goosebumps right now just thinking about it. Just thinking about jamming with Tom [Araya, bass/vocals]… And Paul‘s [Bostaph, drums] been my buddy from FORBIDDEN up there. And with Kerry, that intro starts and I’m just fucking so… It’s SLAYER — legendary band; one of my favorites. I couldn’t even dream [of something like this happening]. It’s beyond my wildest dreams.”

Holt began filling in for SLAYER guitarist Jeff Hanneman at live shows in 2011, and became the band’s full-time co-guitarist as of 2013, while remaining a member of EXODUS.

Demmel landed in MACHINE HEAD a decade after the breakup of VIO-LENCE, which also featured future MACHINE HEAD frontman Robb Flynn. Robb went on to form MACHINE HEAD in 1992, with Phil coming into the group in 2003.

Demmel announced in October that he would leave MACHINE HEAD at the end of the band’s fall 2018 North American tour, explaining in a statement that it was “simply time” for him “to step away and do something else musically.” 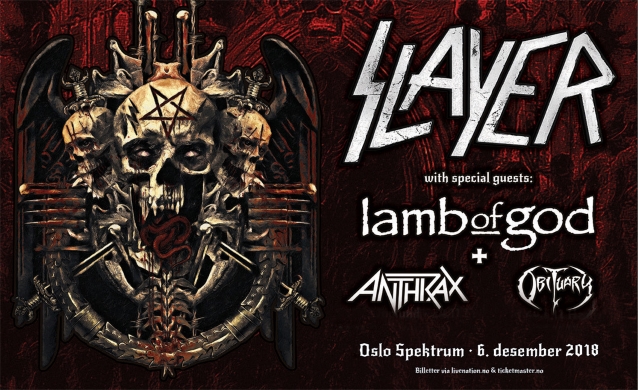