ACE FREHLEY Blasts GENE SIMMONS And PAUL STANLEY For Reunion Comments: 'Now The Gloves Are Off'

Ex-KISS guitarist Ace Frehley has slammed his former bandmates Paul Stanley and Gene Simmons over their comments regarding a possible reunion of the band’s original lineip.

Simmons and Stanley told Guitar World magazine in a new interview that while KISS‘s former members were welcome to take part in the band’s “End Of The Road” farewell tour, they can only do so in a guesting capacity.

“Ace and Peter [Criss, drums] have gotten three chances,” Simmons said. “They were in and out of the band — fired — three times. For drugs, alcohol, bad behavior, being unprofessional … they weren’t carrying their load. … So the short answer to your question is we’d love to have Ace and Peter join us here and there. And if they don’t, it’s not going to be because of us. But they’re never going to be in KISS again.”

He added: “Three times is the charm; ‘I promise I’ll pull out’ doesn’t work. It’s the boy who cried wolf: ‘Oh, I’ve been straight for a million years.’ Terrific! Have a good life! … Would we welcome Ace or Peter to jump up onstage for a song or two? Of course. Could we depend on either Ace or Peter to do a full set night after night? Not on your fucking life.”

Stanley said that “it’s really not up to” him whether former KISS members join the band onstage for a guest appearance on the upcoming tour. “But I’ll say that this is a celebration of this band and its accomplishments and its history,” he said. “So anybody who was shortsighted enough to think this should be a reunion is missing the point. That being said, I would love to see everybody at one point or another be onstage. And if that doesn’t happen, it’s their choice, not mine.”

After Simmons‘s and Stanley‘s comments were first reported earlier today, Frehley took to his Facebook page to issue a fiery response, accusing Simmons of being “an asshole and a sex addict” who allegedly “groped” Ace‘s wife and “propositioned her” a year ago.

“Gene, your memory is really incorrect!… I was NEVER FIRED from KISS, I quit twice (not 3 times) of my own free will, because you and Paul are control freaks, untrustworthy and were too difficult to work with!

“Your slanderous remarks about my bad habits over the years has cost me millions of dollars and now that I’m over 12 years sober, you’re still saying I can’t be trusted to play a whole nights show! Well, that’s exactly what I’ve been doing for the last 12-years with different configurations of ‘The Ace Frehley Band’ to you and Paul‘s dismay!

“I’m also the most successful solo artist to come out of the original KISS lineup, and proud of it!… You and Paul have tried to derail my solo career multiple times over the years unsuccessfully.

“I’ve tried to be nice and friendly by inviting you and Paul to perform on my past albums for eOne Music, give each of you guys one of my prized Gibson Les Paul 59′ models, but today’s comments have made me realize you’re just an asshole and a sex addict who’s being sued by multiple Women, and you’re just trying to sweep it all under the carpet!

“The icing on the cake was when you groped my wife and propositioned her in Los Angeles at the Capitol Records building behind my back, when I was trying to help you out at one of your ‘Vault Experiences’ which I only found out about several weeks later… she was planning on pursuing a suit against you, but I told her to call it off!!!

“Well, now the gloves are off after your terrible comments today and I’m thinking that this really may be ‘The End Of The Road Tour’ for you guys!!!

“Without a complete and heartfelt apology, an offer to give me my old job back, and removing Tommy from the Throne that I created… THE SHIT WILL HIT THE FAN AND THEY’LL BE NO STOPPING IT-IT’S ON!!!”

In the months after KISS announced the trek, fans wondered openly if Frehley and Criss would be involved in the tour, especially considering the apparent recent goodwill between Paul and Gene and Ace. Frehley‘s new album “Spaceman” — a title suggested by Simmons himself — features two songs the pair wrote together, and the duo completed a joint summer tour of Australia, after which Frehley fired his solo backing band and hired Simmons‘s. Stanley, meanwhile, appeared on Frehley‘s previous studio album, the 2016 covers set “Origins, Vol. 1”.

The first North American leg of “End Of The Road” will launch January 31 in Vancouver, British Columbia, Canada at Rogers Arena and will hit an additional 43 cities.

…Gene, your memory is really incorrect!…I was NEVER FIRED from KISS, I quit twice… 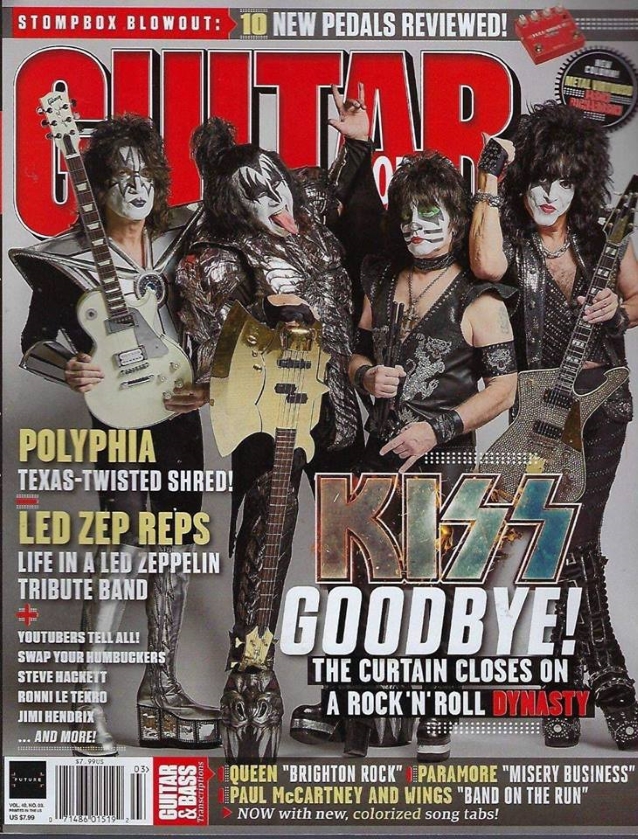