Last month, Gramm announced his retirement from performing as a solo artist. The vocalist broke the news of his decision to stop touring at the conclusion of his December 29 concert in Schenectady, New York

Asked what he meant when he said that he was putting an end to his solo career, Gramm told WXXI‘s Beth Adams: “When I left FOREIGNER in 2003, I put together my own band and I’ve been playing with various versions of that band, on and off, [until] last [month]. And I decided that I’ve been doing this for over 45 years, and we have a little one at home, and I wanted to spend time at home with Robyn [Grammatico, Gramm‘s wife] and my baby girl’s name is Luciana. [She’s] a year and three months. She’s a little redhead and she’s feisty and sweet and so much fun to be around.”

Pressed about whether it was a difficult decision for him to step away from the road, Lou said: “You know what? I thought it would be. But I’ve talked to some professionals in sports, and they tell me that they knew when it was time. And it wasn’t because their skills were diminished; they just knew it was time to change courses.”

Gramm made it clear that he wasn’t completely retiring from performing live. “I’m still gonna be doing occasional shows with FOREIGNER,” he said. “And there’s other configurations. I do a show as a guest vocalist with ASIA. And there’s a few other things that pop up every now and then. There’s these things where there’s orchestras and a rock band that play your hits and you sing with an orchestra as a background. I’ve done ’em over in Europe — they’ve been doing ’em over in Europe for about 20 years — and it’s stunning how interesting it sounds. That kind of thing sounds real interesting on ‘Juke Box Hero’ and things like ‘Cold As Ice’ and stuff. Even the heavy songs sound good with strings behind them.”

Gramm also confirmed that he was planning to release new music in the not-too-distant future. “I have a few little tidbits that I’m working on, massaging them into a song,” he said. “But I’ll tell you what I am doing. Back in the days when I did my solo albums, I put 10 songs on the album. There were probably 13 songs, and the other three weren’t finished. And so those songs would be not put on the album. So between my two solo albums and SHADOW KING, there’s about another album’s worth of songs that were never finished. And what I’m doing is finishing them three at a time and putting them where they can be downloaded.”

SHADOW KING was a collaboration between Gramm and current DEF LEPPARD guitarist Vivian Campbell. The group released a self-titled album in 1991 and performed live only once, at the Astoria Theatre in London, England on December 13, 1991.

By the time Gramm left FOREIGNER for the first time in 1990, he had already released two successful solo albums: 1987’s “Ready Or Not” and 1989’s “Long Hard Look”. He went on to launch LOU GRAMM BAND, which released an all-Christian rock album in 2009. He followed it up with “My Baby” in 2015.

The 68-year-old Gramm left FOREIGNER for good in 2002 and has battled health issues in recent years, including the removal of a non-cancerous tumor. He told the Democrat & Chronicle last year that he was planning to retire, but still reunited with FOREIGNER for several shows in 2018 to celebrate the band’s 40th anniversary.

Gramm was the voice on FOREIGNER‘s biggest hits, including “Feels Like The First Time” and “Cold as Ice” from the band’s eponymous debut in 1977, and later songs like “Hot Blooded” and “I Want to Know What Love Is”.

FOREIGNER replaced Gramm with Kelly Hansen in 2005. Guitarist Mick Jones, the only remaining original member, suffered from some health issues beginning in 2011, eventually resulting in heart surgery in 2012. 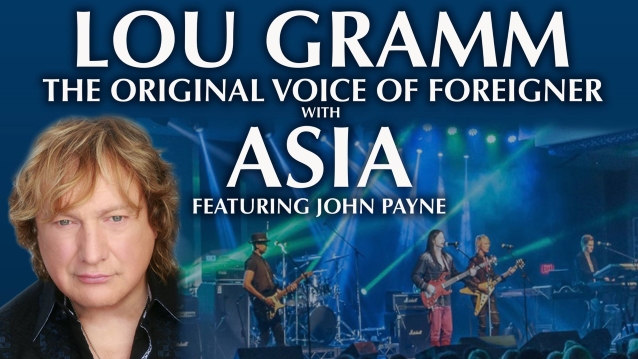