TWISTED SISTER frontman Dee Snider says that he is working on an updated version of his 1987 book “Dee Snider’s Teenage Survival Guide: Or How To Be A Legend In Your Own Lunch Time”.

Snider wrote “Teenage Survival Guide” more than three decades ago when he was approached by Doubleday to produce a sequel to a popular book from the ’50s called “‘Twixt Twelve And Twenty” by American music icon Pat Boone. At the time, the editors at Doubleday saw Dee as a modern-day pop figure whom kids would listen to and assigned a rock journalist, Philip Bashe, to work with the singer.

During a recent appearance on “The Jasta Show”, Snider said about how he came to write the book (hear audio below): “[Doubleday] thought that I had my finger on the pulse of what young people were feeling and they thought it was time for a more contemporary book written not by a priest, a doctor, a psychologist, a teacher. It’s always written by just a person talking. And I said, ‘I love that.’ Like the cool uncle or the big brother — sort of like the straight talk that you might get from that person.

“I worked with a writer — his name was Philip Bashe,” he continued. “He was a rock writer, and he was very good, but he kept trying to intellectualize the things I said. And I kept re-editing the thing and cutting out the four-syllable words, ’cause I wasn’t using them back then, and just trying to make it straight talk, straight talk. And putting in jokes and just being light about it — and, again, being the cool uncle, cool big brother.

“In the final stages of this thing, I was unhappy with the book — the book wasn’t right there — and I went away for two weeks to fix it, to tweak it,” Snider said. “And I said to the book company, ‘You’re not printing books yet, are you?’ And they said, ‘We would never do that, Dee. We want your vision.’ I said, ‘Okay.’ So [for] two weeks, I sequester myself, I rewrite this whole book, I just tweak it, hand it in. The next day, they go, ‘Dee, something happened and 25,000 books were accidentally printed up without your edits. But don’t worry — we’re destroying them.’ I said, ‘Okay. ‘Cause I really wanna support this book.’ The day after, the president of the company calls and says, ‘Dee, we can’t destroy 25,000 books. We’ll put your changes in the second run.’ I said, ‘You know what? Fuck you guys!’ I said, ‘I’m not promoting this book, I’m not supporting this book, I’m not getting behind this book,’ and I just bad-rapped the book and I did nothing. Reviews come out, from Rolling Stone to Psychology Today. Every review said, ‘The greatest book ever written about growing up.’ And I realized, even though it was only 80 percent of my vision, it was way better than anything written by doctors, teachers, priests, parents. And the book never went anywhere.

“Cut to years later, I hear reports that in the Soviet Union, they’re releasing my book in installments. They translated it into the only Soviet-run teen magazine as installments in the ’90s now, and kids in Russia are reading the ‘Teenage Survival Guide’. I thought it was bullshit, but I had people who went over to the Soviet Union and said, ‘Dee, they’re using your book in classrooms.’ So, after the walls comes down, I get contacted to publish a Russian version, which they did. Then one day I get a call from the Moscow Times asking me how it feels to know that every Russian child grows up reading ‘Dee Snider’s Teenage Survival Guide’. It’s insane! So, if you go online and look for the ‘Teenage Survival Guide’, copies are going for hundreds and hundreds of dollars. You can’t get them. And [there are] comments from people who have emigrated here, saying, ‘I read this book when I was in the Ukraine,’ ‘I read this book when I was in Czechoslovakia, and it helped me, and I’m trying to find a copy for my child.’ And people in America who did read the book — ’cause it was in libraries and stuff — I’ve had people walk up to me on the street every now and then and just go, ‘Your book saved me.’ Because I talked about depression, I talked about suicide, I talked about death, I talked about divorce, I talked about masturbation, I talked about sex, I talked about not having sex, I talked about STDs — I talked about everything, just like straight talk.”

Dee went on to say that he owns the rights to “Dee Snider’s Teenage Survival Guide” and plans to release a new version of it, although he did not offer any details on when the revamped book will arrive.

In his 2012 memoir “Shut Up And Give Me The Mic”, Snider said that his own kids had read “Dee Snider’s Teenage Survival Guide” and found it “great” but admitted that it “gives them a bit too much information about their dad,” according to Dee. “Nobody needs to know about the first time their father masturbated,” Snider said. “Back then, I just tried to be as honest and as frank as I could be with my readers. Now with four kids and grandchildren, I don’t know if I could still be that honest about my teen years, but I’m glad I was.”

Dee‘s latest solo album, “For The Love Of Metal”, was released in July

TWISTED SISTER called it quits in 2016 after completing a farewell 40th-anniversary tour. 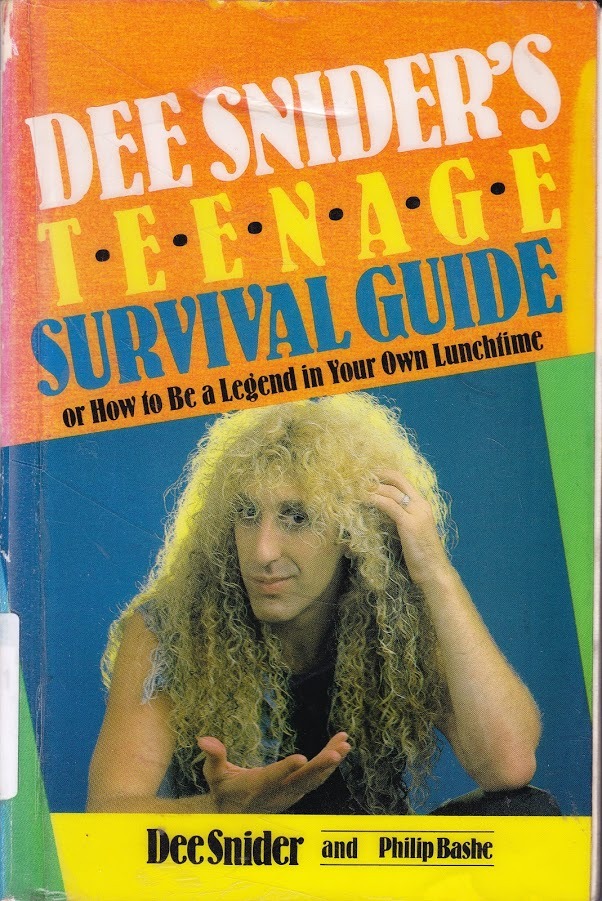