FIVE FINGER DEATH PUNCH has announced a series of new headlining U.S. shows and festival dates for July. Special guests, including IN THIS MOMENT, will support on select show dates. FIVE FINGER DEATH PUNCH will also perform on a handful of major festival shows throughout the summer. Tickets will go on sale February 22 at 10:00 a.m. local time.

FIVE FINGER DEATH PUNCH tour dates with IN THIS MOMENT:

FIVE FINGER DEATH PUNCH‘s current single, “When The Seasons Change”, climbed to No. 3 at rock radio this week. “When The Seasons Change” follows the success of the No. 1 hit single “Sham Pain”, off the band’s latest album, “And Justice For None”. The group also recently released a new video — now the #1 metal video on Apple U.S. — for the album version of “Blue On Black”, a blues rock song originally recorded by the KENNY WAYNE SHEPHERD BAND in 1998.

FIVE FINGER DEATH PUNCH has yet to announce a permanent replacement for drummer Jeremy Spencer, who left the band in December. After sitting out the fall leg of the group’s recent co-headlining tour with BREAKING BENJAMIN, Spencer underwent a second back surgery and will need a significant amount of time to recover.

For its fall tour, FIVE FINGER DEATH PUNCH was joined behind the kit by 33-year-old drummer Charlie “The Engine” Engen. It is not clear if he will remain with the group or if they will seek a new and permanent replacement for Spencer.

FIVE FINGER DEATH PUNCH is currently in the studio working on the follow-up to “And Justice For None”. 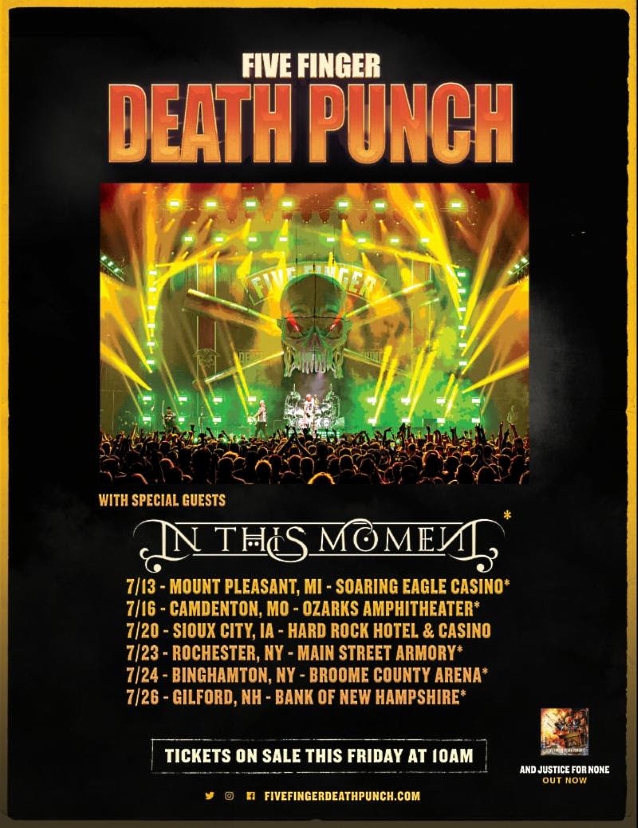