KATATONIA, the Swedish purveyors of dark progressive rock/metal, are starting to make their first moves after an idle year of stillness.

Says the band: “We will begin our return with a celebration of our album ‘Night Is The New Day’, which turns 10 years now in 2019. For the album’s 10th anniversary, Peaceville are set to release a deluxe edition of this classic album on 17th May 2019, and to further commemorate this dark gem, we will return to the live arena to play ‘Night Is The New Day’ in its entirety at six select club shows in Europe in May.

“The 10th-anniversary edition of ‘Night Is The New Day’ will feature new cover artwork from longtime collaborator Travis Smith, a glorious hi-res 5.1 remix created (for the first time) by Bruce Soord and sleeve notes by renowned journalist Dom Lawson.”

Back in December 2017, KATATONIA announced that it was going on a “short-term hiatus” due to “recent issues and injury.”

The band’s latest album, “The Fall Of Hearts”, was released in May 2016 via Peaceville. The follow-up to 2012’s “Dead End Kings” was recorded at Stockholm’s Studio Gröndahl & Tri-lamb studio, and was produced by Anders Nyström and Jonas Renkse. Mixing and mastering duties were carried out by Jens Bogren (OPETH, IHSAHN, DEVIN TOWNSEND) at Fascination Street Studios, with Karl Daniel Lidén (SWITCHBLADE, THE OCEAN, GREENLEAF) brought in as engineer.

“The Fall Of Hearts” was the first KATATONIA record to feature new drummer Daniel “Mojjo” Moilanen and guitarist Roger Öjersson (TIAMAT), who came in just in time to sprinkle some blistering solos on the album. 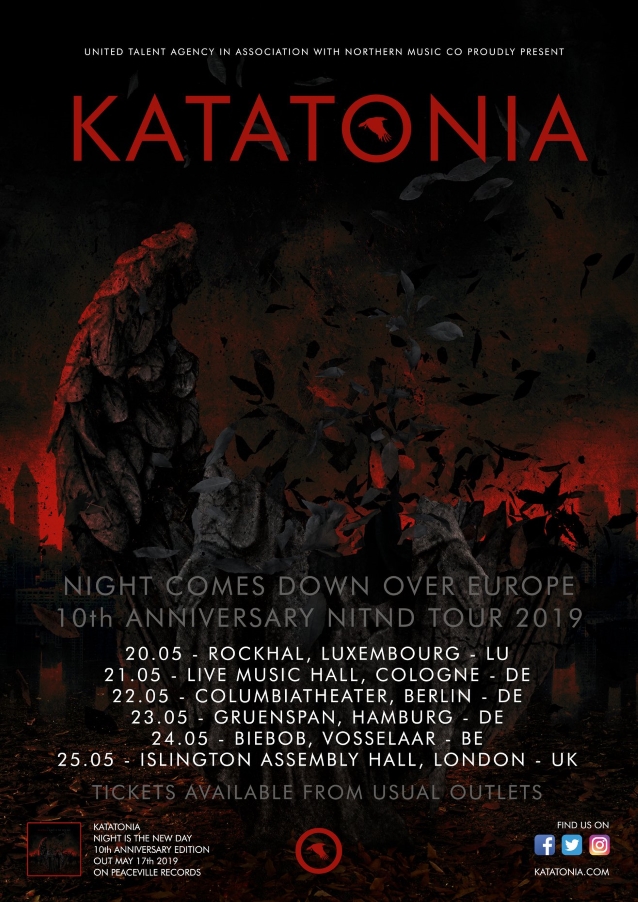