NEW YEARS DAY has set “Unbreakable” as the title of its new album, due later in the year. The follow-up to 2015’s “Malevolence” will include the song “Skeletons”, which was released in November as a standalone single, as well as “Done With You”, “Misunderstood”, “Come For You” and the title track.

Frontwoman Ash Costello spoke about the inspiration for the “Unbreakable” album title earlier today (Friday, February 8) during an interview with Kevan Kenney of the BUILD Series.

She said: “When I really thought about the year it took to write the record, everything that I’ve been through, I really felt like came out unbreakable on the other side. As opposed to our record before this one, where I felt almost like I was too breakable. But now with the fans behind us, and our team behind us, and this new music, I really feel like I’m unbreakable.”

Costello said her favorite track from “Unbreakable” is “Come For Me”, which she described as “a fight song. It’s kind of my invitation to the world that if you’ve got something to say, come say it to my face, “she explained. “I think we can all use a song like that.”

Ash recently told Heavy New York that NEW YEARS DAY‘s new album was “being described as either the poppiest metal album or the most metal poppy album. Both I’m so stoked on. It’s more fun.”

Costello went on to say that while it’s “all good” to reach a wider audience with NEW YEARS DAY‘s new music, the change in the band’s musical direction “was really more for me. I wanted to have fun with it. I wanted music that was fun for me. And I did that. And hopefully people love it too and it’s fun for them.”

This past December, Costello told Alternative Press that “Skeletons” was “one of the lightest-sounding” tracks on the upcoming NEW YEARS DAY disc. “The record, actually, is quite heavy. So we figured we’d start at the bottom of the hill and work our way up instead of at the top and work our way down. So, what you can take away from ‘Skeletons’, though, is that the newer songs are gonna be very catchy. Even though it’s gonna be very heavy music, the melodies and the lyrics are still going to be very, very catchy and poppy.”

In November, Costello said that NEW YEARS DAY‘s new LP will be “totally different” from “Malevolence”. “‘Malevolence’ came out three years ago,” she said. “Are you the same you were three years ago? I hope I’m not. I feel like I’ve improved in songwriting; I’ve improved in singing; I’ve improved in screaming. Every year that goes by, I learn more about want kind of artist I want to be and what kind of art I want to put out. It’s changed quite a bit, so that’s why we put out [the EP] ‘Diary Of A Creep’ to kind of be a little bit of a segue. We wanted to do a lot of what you can expect in the future. We covered everything from PANTERA to NEW ORDER. That’s what you can expect. ‘Skeletons’ is the first taste – a heavy riff with a very catchy chorus… It’s not completely left-field — it’s still very NEW YEARS DAY — but it’s growing up.” 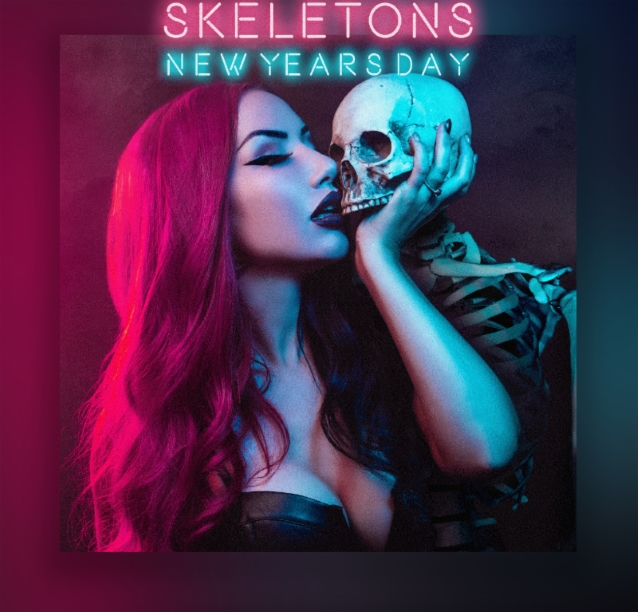