SANCTUARY will perform its 1988 debut album, “Refuge Denied”, in its entirety on the band’s upcoming North American tour. The trek will kick off on July 11 in Atlanta and conclude on August 17 in Seattle. Support on the tour will come from GHOST SHIP OCTAVIUS, the band featuring former NEVERMORE drummer Van Williams.

A year ago, SANCTUARY completed a North American tour as a tribute to the musical legacy of singer Warrel Dane, who passed away in December 2017. Guest vocals for SANCTUARY on the trek were provided by Joseph Michael (WITHERFALL). Also joining the band on the road was second guitarist Joey Concepcion (ARMAGEDDON, THE ABSENCE). Both Michael and Concepcion will return for this summer’s tour.

SANCTUARY guitarist Lenny Rutledge told Metal Wani about the band’s new lineup: “Joseph, in my opinion, has been nailing it every night, which for me, was kind of a concern, and for him as well, I’m sure. I had a really great time, and I feel like we’re really kind of getting into our groove. We’re coming into our stride… We wanted to make it feel right. If we couldn’t, we weren’t going to go any further. Once I started working with Joseph, I felt confident that we could do it justice, and I think he did as well. I think we are doing it justice. You never really know until you’re out there, and from the crowd reaction and what people to say to us when we’re done, they really feel like it’s a good representation and we’ve done Warrel respect. I think we did it right. I think a lot of people agree.”

Lenny went on to say that Joseph has “breathed new life into” SANCTUARY. “We’ve been able to play some songs that we don’t normally play with Warrel,” he said. “In Warrel‘s later years, he had some things going on with his voice and his health. Although he was still an amazing vocalist and writer and everything, there was just some things that we shied away from doing, and now that Joseph‘s in the band, he has kind of a different range that’s available to him, so we’ve been trying some other stuff. It’s kind of breathed a new energy into the band, so that’s been really cool for us. We’re moving forward.”

Dane tragically passed away on December 13, 2017 due to a heart attack while recording his second solo album in São Paulo, Brazil.

Formed in 1985, SANCTUARY was signed to Epic Records with the help of MEGADETH guitarist Dave Mustaine and released two records, “Refuge Denied” and “Into The Mirror Black” (1989), which saw them perform with the likes of MEGADETH, FATES WARNING, WARLOCK and DEATH ANGEL. The group disbanded in 1992 as members Dane and bassist Jim Sheppard went on to form the highly successful metal act NEVERMORE with acclaimed guitarist Jeff Loomis. SANCTUARY reunited nearly 25 years later in 2010 and appeared at several festivals worldwide before returning to the studio to record their acclaimed full-length comeback album, “The Year The Sun Died”, for Century Media Records in 2014. 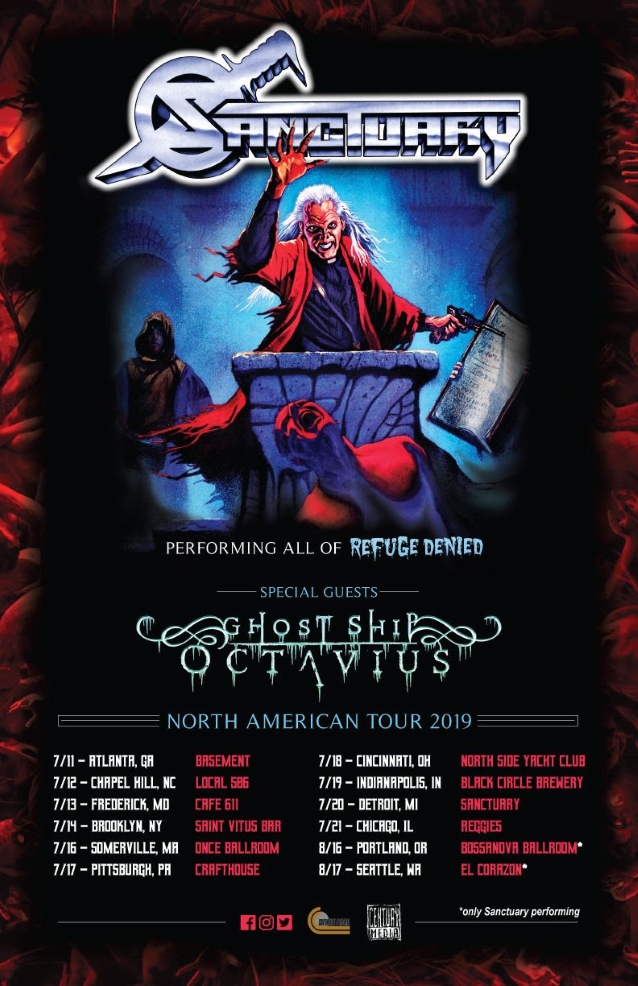