German thrash metal veterans DESTRUCTION will release their 17th studio album, “Born To Perish”, on August 9 via Nuclear Blast. The disc was recorded in January and February 2019 with V.O. Pulver (PRO-PAIN, BURNING WITCHES, NERVOSA) at Little Creek Studios in Switzerland and is the first DESTRUCTION album to feature Randy Black on drums and second guitarist Damir Eskic.

Today, the band has unleashed the visualizer video for the first single and vicious title track, “Born To Perish”.

Frontman Schmier states: “The title track was the first song we wrote for the new record and it definitely shows the strength that DESTRUCTION has in 2019. It immediately set the bar high for the rest of the album. It features everything that we stand for: speed, picking, variety and punch. Randy came up with some very cool drum patterns and Damir offered up a really crunchy solo part, so both new members are heavily involved here!”

Guitar player Mike adds: “We started the song with some drum patterns that Randy gave us and adjusted some riff ideas we had. It was a nice challenge to write some tight right hand picking for a 212 beats per minute song. As a guitar player this is close to my speed limit, especially on the triplets — great fun to play though!”

The cover artwork for “Born To Perish” was created by acclaimed artist Gyula from Hungary, who has also worked with ANNIHLATOR, GRAVE DIGGER, STRATOVARIUS, TANKARD and many more.

Gyula stated: “Schmier wanted to get a simple and different image than my previous DESTRUCTION covers. When we discussed the new concept, I was happy with this approach because I had the chance to use a different tool, no painting but ink-drawing style.
“When the band mentioned the album title, I got the idea of a crest composition without the typical brave lion or eagle but vultures with two heads and we filled the image with several symbols.

“I love this DESTRUCTION cover — maybe my fave I did for them so far!”

Schmier added: “We wanted something basic this time. I had something like an emblem in mind, a stamp, a DESTRUCTION coat of arms.

“We had so many great colorful graphical covers in the past; this dark album title needed something different.

“This record marks the debut of the four-piece DESTRUCTION again. I am very happy with the result and that the great Gyula understood right away what direction we wanna go — the album is vicious, dark and hard-hitting. The cover art is the perfect prelude for that.”

Schmier recently told France’s Duke TV about the making of DESTRUCTION‘s upcoming album: “It’s a process that took us three months — writing, recording and mixing. The new influence of the guys is there, because there’s more shredding leads. Randy is a very solid, very tight player — very groovy also. You can hear that. We tried to make songs this time that are hitting on the target faster — the songs hit you right away. It’s brutal, but it’s very catchy. So you hear the songs the first time, right away you will remember [them]. You don’t write an album like this every time. Sometimes you write songs, and after a while, you’re, like, ‘It’s maybe too complicated,’ because you wanna be an artist, you wanna express yourself. I think this time we managed to write an album that’s very punchy.”

Damir is a Swiss guitar player of Bosnian decent who works as a guitar teacher, himself being a former pupil of Tommy Vetterli (CORONER). He also plays in a heavy metal band called GOMORRA and previously contributed three solos to DESTRUCTION‘s 2016 album “Under Attack”.

DESTRUCTION previously played with two guitarists in the late 1980s (with the addition of Harry Wilkens) and then again throughout much of the 1990s (Michael “Ano” Piranio). 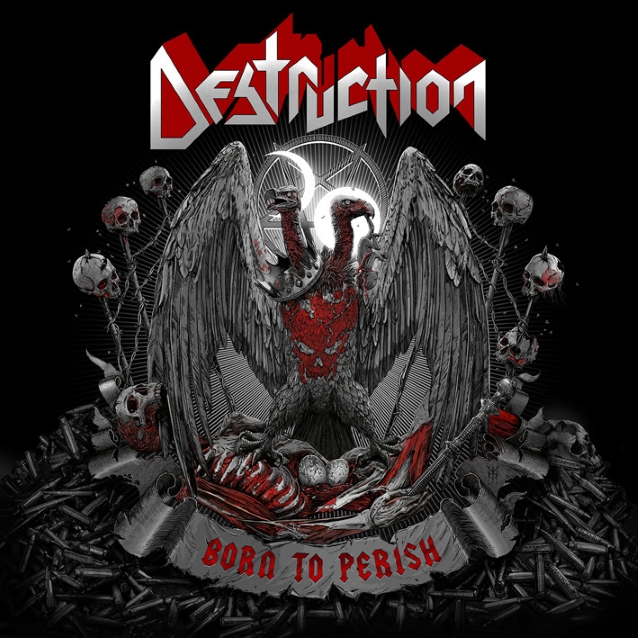 DESTRUCTION: Official Visualizer For 'Born To Perish' Title Track
Tagged on: HRRL
tom lats May 31, 2019May 31, 2019 Rock News No Comments