Sebastian Bach will celebrate the 30th anniversary of SKID ROW‘s acclaimed, self-titled breakout debut album with a U.S. tour where he will perform the record in its entirety plus other songs from his celebrated catalog. The tour will kick off in Nashville, Tennessee on August 30 and will end in Pinellas Park, Florida on November 2.

During an appearance earlier today (Thursday, June 6) on SiriusXM‘s “Trunk Nation”, Bach stated about his decision to focus on SKID ROW‘s first full-length effort: “This record is near and dear to everyone’s heart the world over, and I’m finding this out by announcing this tour. It’s just crazy. The people are freaking out.”

Bach, who hasn’t played with SKID ROW since 1996, also said that he would love to see some of his former bandmates join him at some point during the tour.

“I would like to say right here right now [to] any original member in SKID ROW — there’s five people in the world that can say that,” he said. “We all know who the five guys are that made that record. I have an open invitation out to any of those guys, if they would like to get onstage and jam. I don’t foresee that happening, but I’m throwing it out there.

“The bottom line is you only get so many ’30 years’s,” he laughed. “It doesn’t roll around too often — a 30-year anniversary. So, would I like to celebrate it with the original members? Yes, I would. Of course I would. But who knows if I’m gonna get hit by a truck tomorrow. So we’re kind of like getting older now. So we can either shit or get off the pot [laughs], I think the saying goes.”

Bach went on to mock SKID ROW‘s original record label for recently releasing a digital deluxe edition of the band’s debut LP via Rhino that includes the original album remastered for the first time, expanded with the bonus track “Forever”.

“Around the year 2000, my buddy Jason Flom, who signed SKID ROW and GRETA VAN FLEET, by the way, he told me at that time, in 2000, that the first SKID ROW record was number four or five in the top ten-selling records in Atlantic Records history,” Sebastian said. “AC/DC ‘Back In Black’, I believe, is number one; LED ZEPPELIN ‘II’ is number two; FOREIGNER ‘4’ is number three; but SKID ROW‘s [first album] is either five or four or six. I don’t know if that is true today.

“When you have a record that has sold that many copies, and it’s the 30th anniversary, of course the record company is going to upload a file in celebration,” Bach quipped. “Back in January, to celebrate the top ten release of Atlantic Records history, a file was uploaded. This celebratory file is something that we can all download, and we can look at the bar going across, and then at the end of the bar, we can go, ‘Oh my God! I’ve been waiting 30 years for this file! I can remember the first time I got this record, with the liner notes, the lyrics.’ You’re not gonna get that in the deluxe version, folks.”

According to Bach, Los Angeles fans will get a special treat when his tour makes its way into their town.

“On this tour, we are playing two nights in Hollywood, California at the legendary Whisky A Go Go,” he said. “So if someone’s buying a ticket for the first night, they’re gonna get the first SKID ROW record in its entirety. On the second night, for one night only, Bobby Jarzombek [drums], Rob DeLuca [bass], Brent Woods [guitar] and myself, on the second night in Hollywood at the Whisky, we’ll play [SKID ROW‘s second] record ‘Slave To The Grind’ in its entirety.” 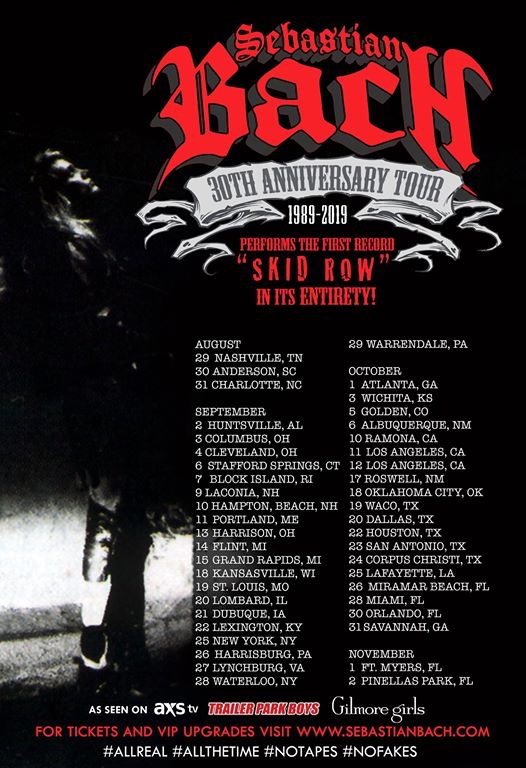