Fan-filmed video footage of WHITESNAKE‘s June 19 performance at Mediolanum Forum in Milan, Italy can be seen below.

WHITESNAKE is touring in support of its latest album, “Flesh & Blood”, which was released on May 10 via Frontiers Music Srl. The disc follows the 2011 critically acclaimed studio album “Forevermore” and 2015’s “The Purple Album”, a reimagining of DEEP PURPLE classics from WHITESNAKE mastermind’s David Coverdale‘s time in that band.

Joining Coverdale on “Flesh & Blood” is the powerhouse band comprised of Reb Beach and Joel Hoekstra on guitar, Michael Devin on bass, Tommy Aldridge on drums, and Michele Luppi on keyboards.

Since joining the band four years ago, and just in time for 2015’s “The Purple Album”, Chicago native Joel Hoekstra has really come into his own, not only as a highly impressive axe-slinger, but also as a very accomplished songwriter too, co-writing six of the songs for “Flesh & Blood” with Coverdale.

Guitarist Reb Beach, who originally joined WHITESNAKE in 2002, has stepped up to become the group’s bandleader and guides the band to implement Coverdale‘s musical vision. As well as bringing his impressive musical chops to the band, Reb has co-written five songs on the new album, the fourth studio album he has appeared on, commencing with 2008’s highly acclaimed “Good To Be Bad”.

It was the “Good To Be Bad” follow-up, “Forevermore” (2011), that saw the debut of bassist Michael Devin. The New Englander’s four-string-depth-charge-bass-bombs definitively underpin and drive the sound of WHITESNAKE in the 21st century.

Rounding out the rhythm section is David‘s longest serving ‘Snake, the renowned drummer and unstoppable percussionist Tommy Aldridge, who has been with WHITESNAKE in some capacity for 30 years. Tommy made his debut with WHITESNAKE way back in 1987 in the “Still Of The Night” video, becoming a mainstay behind the kit for successive albums and tours.

Last, but certainly not least, the band is completed by the inventive keyboards and vocals of Italian maestro Michele Luppi, who made his live debut in 2015, as documented on “The Purple Tour” live CD/DVD (2018).

The current incarnation of the band carries on the long and unwavering tradition of mainman David Coverdale being surrounded by cream of the crop players who go all in to bring fans the best hard rock humanly possible.

WHITESNAKE‘s “Flesh & Blood” world tour features songs from the new studio record alongside the band’s biggest hits and songs from one of the greatest back catalogues in rock ‘n’ roll history, spanning over 40 years. 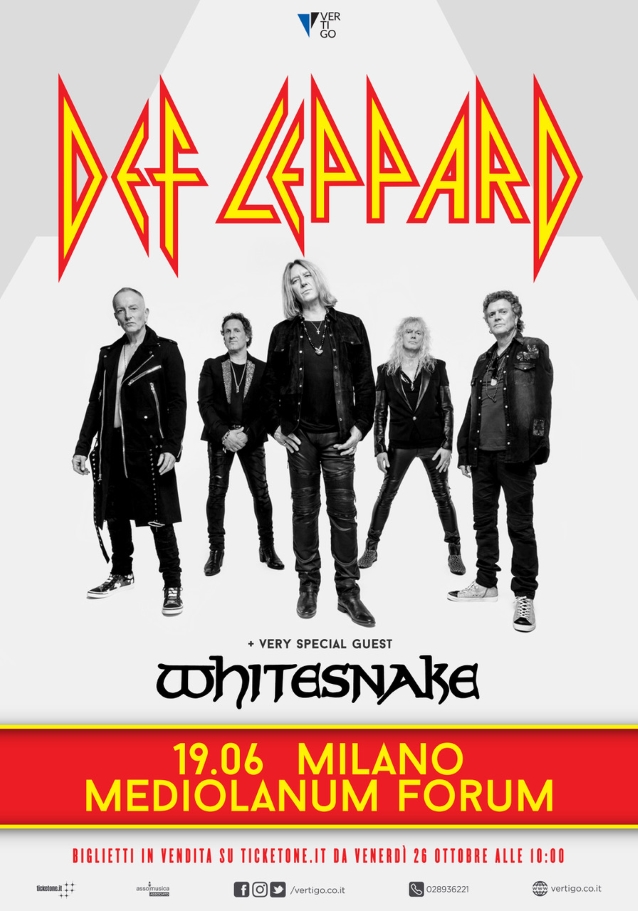