With ten days to go until SLIPKNOT‘s momentous “Knotfest Roadshow” tour begins, details of the Slipknot Museum have been released.

In addition to the strongest heavy rock lineup of the summer — SLIPKNOT with special guests VOLBEAT, GOJIRA and BEHEMOTH — the “Knotfest Roadshow” will feature a specially curated version of the hugely popular Slipknot Museum. The mobile installation will be traveling with the tour and available to view in each city. An immersive exhibit showcasing items from SLIPKNOT and Knotfest history, including instruments, memorabilia, wardrobe and personal never-before-seen items.

Access to the museum will be available in multiple tiers:

* Tier 1 will provide full access to the museum, (1) pit ticket, early access to the venue, plus unique fan photo opportunities and comes with an exclusive merch bundle available for purchase from
* Tier 2 provides early venue and museum access, (1) premium ticket and exclusive merch.

Full info VIP Packages and how to purchase can be found at cidentertainment.com.

The “Knotfest Roadshow” will kick off its nationwide tour on July 26 in Mountain View, California. It will hit a further 29 cities, culminating at The Woodlands, Texas on September 8.

SLIPKNOT frontman Corey Taylor recently spoke to BBC Radio 1‘s “Rock Show With Daniel P. Carter” about the band’s new live show, which received its world premiere on June 7 at Rockfest in Hyvinkää, Finland. “It’s been really good,” he said. “The set’s been pounding. The show looks amazing. We’re all playing really well. We’re getting bigger pops from things like [last year’s standalone single] ‘All Out Life’ than we do from stuff like ‘Duality’, which is nuts… Honestly, it’s everything that we’ve wanted to do for years, and we just never had the budget and we had also had a lot of people around us telling us we couldn’t do it… We want people all over the world to see the same show. If there’s an A and B rig, they’re identical. We don’t wanna come in with some tired, half-assed bullshit. It’s not who we are, and we’ve had to contend with that almost our entire career. So not only is it interactive — there’s video, there’s fire — but the whole set looks like an industrial complex. This is our attempt to create some IRON MAIDEN stuff, which is something we’ve been trying to do for a while.”

SLIPKNOT‘s European tour concluded on July 5 at the Resurrection Fest in Spain.

The band’s sixth album, “We Are Not Your Kind”, will be released on August 9 via Roadrunner. The disc was once again recorded at a Los Angeles studio with producer Greg Fidelman, who engineered and mixed SLIPKNOT‘s 2004 album “Vol. 3: (The Subliminal Verses)” and helmed 2014’s “.5: The Gray Chapter”. 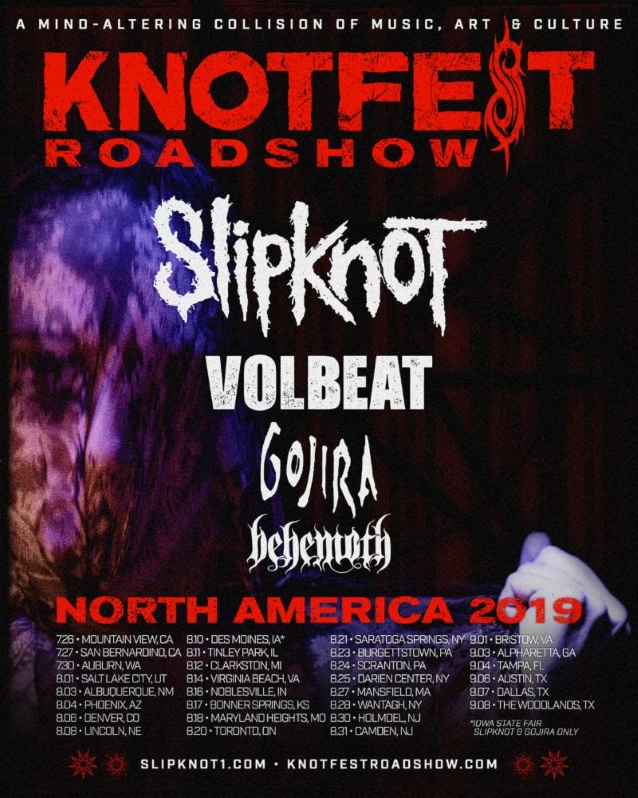