British heavy metal legends IRON MAIDEN will embark on the Australian leg of the “Legacy Of The Beast” tour in May 2020. Support on the trek will come from KILLSWITCH ENGAGE.

MAIDEN frontman Bruce Dickinson commented: “We’re immensely proud of this show and we’ve had great reactions from the many fans who came to see us in Europe, North America, Mexico and South America.

“The production for Australia is exactly the same as the other shows on this tour so far and is based on our mobile game the ‘Legacy Of The Beast’, which basically takes various incarnations of Eddie into many different MAIDEN worlds. This inspired us to put together a stage show to take our fans through different worlds and experiences set to appropriate songs.

“It is not that easy designing different worlds on stage and we put a huge amount of work into this to make it work, and the end result we feel is our most spectacular and certainly the most complex show to date. We’ve got all kinds of crazy things going on, including a replica Spitfire plane dominating the stage during ‘Aces High’, tons of pyro, a giant Icarus, muskets, claymores and some truly marvellous flame-throwers which I have a hell of a lot of fun with, as you will see! And of course, we have Eddie, as you’ve never seen him before, and absolutely loads of other surprises.

“I’ve had the time of my life playing with all these magnificent props on stage; it’s been fantastic. We can’t wait to bring this show to you!”

Tickets go on sale on Thursday, November 14 at 12 noon from Ticketek.

MAIDEN‘s 2019 North, South and Central America trek comprised 44 shows in six countries, which, combined with the band’s 2018 European dates, means that the group has taken the “Legacy Of The Beast” show to over one and three quarter of a million fans around the globe.

The first leg of the “Legacy Of The Beast” tour opened in Europe last year to outstanding critical acclaim, not just by the 750,000-plus fans who came to see the show but right across national press and rock media, including The Times (U.K.) newspaper calling it “an extraordinary show filled with world class theatrics… a masterclass in performance and staging.” 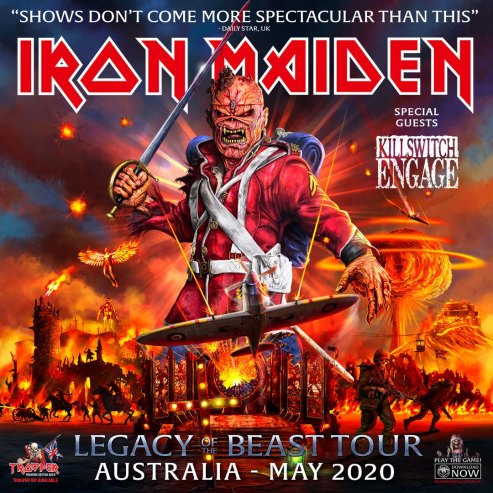