SEVENDUST‘s Morgan Rose returned to the live stage last night (Saturday, December 28) at the the Georgia Theater in Athens, Georgia as part of “Sevendust Acoustic Xmas” — a three-city swing through Florida and Georgia in between Christmas and New Year’s Eve.

The show marked Rose‘s first live appearance since he underwent surgery earlier in the month for an undisclosed ailment which caused the cancelation of the band’s U.K. shows as the support act for ALTER BRIDGE and SHINEDOWN.

SEVENDUST announced the cancelation on December 12, revealing that Morgan was under doctor’s orders to stay not to leave the U.S. Four days later, Rose posted a couple of hospital photos and wrote in part, “I’m not gonna get into what the last week has been like too much. I hope everyone will understand. I will say I’m lucky to be here, and that the people that worked round the clock with me are the reason for that.”

After expressing confidence that he was “out of the woods” but would need another surgery in the next few months, Rose remarked: “Many people sent birthday wishes to me on the day I was being wheeled in for surgery saying how much of a bummer it must have been to spend my birthday like that. I will say that it was probably the best birthday I’ve ever had. I was alive. And that wasn’t so certain before that day.”

In a 2018 interview with CrypticRock.com, Rose admitted that he no longer parties as hard as he once did while on the road with SEVENDUST. “We are not the way that we used to be as far as the self-inflicted damage we put on ourselves with extracurricular stuff,” he said. “Some of the guys are in tip-top shape. Me, I tend to have a few more beers or cocktails maybe than the other guy, but I get my rest.”

SEVENDUST guitarist Clint Lowery recently said that the band has “pretty much wrapped” the recording process for its new album, tentatively due next summer. The follow-up to last year’s “All I See Is War” was once again tracked at Studio Barbarosa in Gotha, Florida with producer Michael “Elvis” Baskette, who has previously worked with ALTER BRIDGE and SLASH, among others. 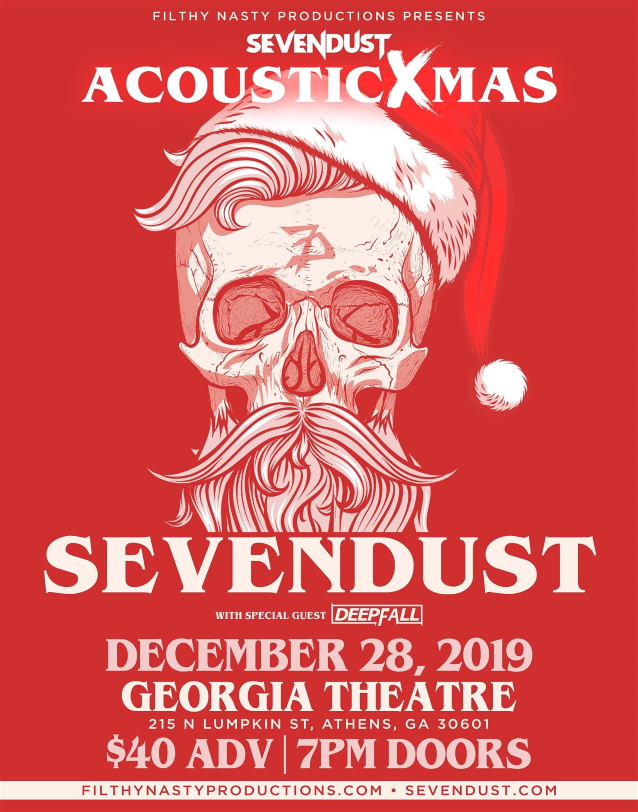