Fan-filmed video footage of BRITISH LION‘s December 17 concert at Live Rooms in Chester, England can be seen below.

BRITISH LION is the side project of Steve Harris, bassist and co-founder of metal icons IRON MAIDEN.

Recorded, engineered and mixed at Barnyard Studios by Tony Newton and produced by Steve Harris, “The Burning” is crammed with powerful hard rock melodies, with two songs “Lightning” and “Spit Fire” being made available for immediate download from tomorrow with all album pre-orders.

Taylor said: “We’ve been working on ‘The Burning’ for the past couple of years and everyone is really pleased with the results. We started playing some of the songs live on recent tours and got a fantastic reaction from our fans so we are really excited to be sharing this album with the world. We’re also looking forward to heading out on the road again and seeing everyone at the shows.”

BRITISH LION has been tirelessly honing its live show performances with club tours every year and festival dates whenever time allows, building and establishing a firm and dedicated fan-base, reaching 24 countries across the globe so far.

Asked how the musical direction of BRITISH LION‘s follow-up effort will be different from “British Lion”, Harris told The Metal Voice: “The band has evolved over the last five or six years live — we’ve played quite a lot of shows in Europe and stuff — so it’s become more of a tighter band. I think we’ve found our direction is naturally evolving, and if anything, I think it’s getting heavier than it was, really. It’s very melodic. The songs are… I don’t know… There’s still kind of a UFO, THIN LIZZY type of influence, I think, in a lot of them, [and] there are influences too, but in general, I think we are getting just a little bit harder-edged, really. These days, I suppose there are some bands that make even MAIDEN sound like THE MOODY BLUES — there’s some real, real heavy bands out there — so what I think is heavy and what other people think is ‘getting heavier’ is two [completely different things]. But we feel we’re a bit harder-edged than we were. So it is a bit of a slight directional change, possibly. But it’s been a natural thing; it’s not something we consciously thought, ‘Oh, we’ve gotta go this way.’ It’s just been the way we’re playing our live shows — it’s very powerful, much more powerful live than on record, I think. And I think with the second record, we’ve tried to capture that essence of what we are live more.”

BRITISH LION‘s debut album sold around 3,000 copies in the United States in its first week of release. The CD landed at position No. 3 on the Top New Artist Albums (Heatseekers) chart, which lists the best-selling albums by new and developing artists, defined as those who have never appeared in the Top 100 of The Billboard 200. 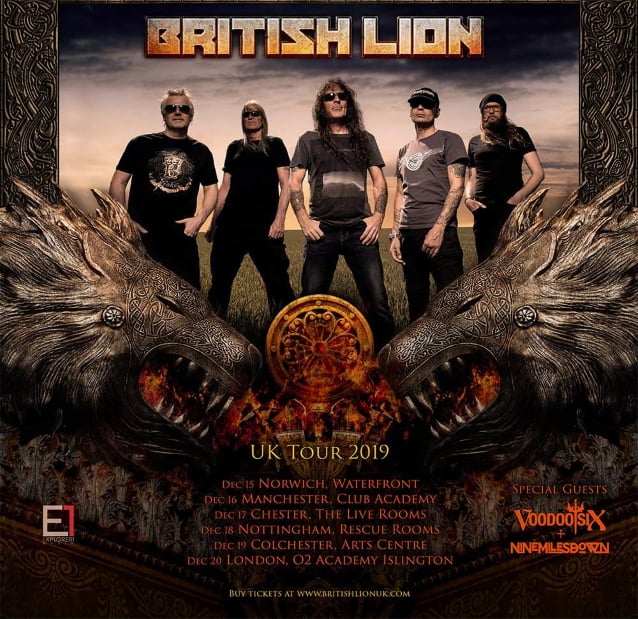