MEGADETH bassist David Ellefson and former MEGADETH guitarist Chris Poland will join forces for a tour of Australia in May. It will mark the pair’s first time hitting the road together in 37 years.

Tickets go on sale on February 24 via Destroy All Lines.

Last September, Ellefson and Poland reunited on stage to perform the band’s classic songs “The Conjuring” and “Peace Sells” (with former ANTHRAX and current ARMORED SAINT singer John Bush on vocals) at Slidebar in Fullerton, California. Video footage of the performance can be seen below (courtesy of YouTube user The Music Revolt).

Said Ellefson: “It was great to reconnect with Chris, musically and personally, who is still, and always has been, one of the most innovative players in metal.

“When we were working on putting together the record, Thom [Hazaert, Ellefson‘s partner] had brought up the idea to Chris of him playing on a track, and somehow it all worked out,” he continues. “Add some killer solos from Chris Poland, on to a song that already features Mark Tremonti [ALTER BRIDGE], Dave McClain [SACRED REICH, MACHINE HEAD], and Eric A.K. from FLOTSAM [AND JETSAM], and you can only imagine how incredible it came out. It’s truly an epic collaboration, and we couldn’t be more excited about it.”

Poland added: “Honestly the whole thing was a blur. Thom had told me they were working on what would become the ‘Sleeping Giants’ record, and I asked him if I could play on it. It was great to reconnect with David, musically, and the song has such a great energy. It was such a quick, painless process, and there’s so many other incredible players on the song, Mark Tremonti, etc, that it really couldn’t have been any cooler.”

Poland recently signed to Ellefson‘s relaunched Combat Records label. Combat released a deluxe reissue of Chris‘s 1990 solo debut, “Return To Metalopolis”, in November. Originally made avaialble on Enigma Records in 1990, “Metalopolis” was Poland‘s return to the stage after his 1987 departure from MEGADETH. Regarded by many as an unsung shred masterpiece, “Metalopolis” showcases Poland‘s signature jazz-infused thrash/rock style, in a collection of timeless instrumental compositions. 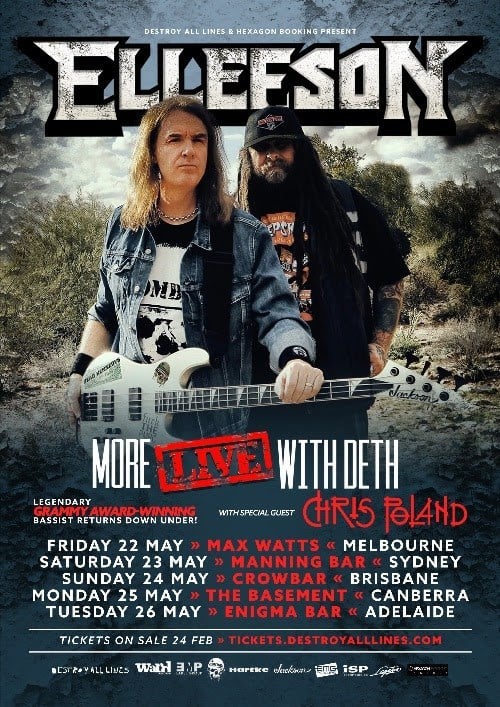