METALLICA's KIRK HAMMETT And ROBERT TRUJILLO To Perform With THE WEDDING BAND In Columbia, South Carolina

THE WEDDING BAND, the side project of METALLICA guitarist Kirk Hammett and bassist Robert Trujillo, along with UGLY KID JOE singer Whitfield Crane and BAD WOLVES guitarist Doc Coyle, will perform on Sunday, March 8 at The Senate in Columbia, South Carolina. They will be joined at the show by drummer Jon Theodore (THE MARS VOLTA, QUEENS OF THE STONE AGE) and guest vocalist Bobby Patterson.

Crane told the Ontario crowd about THE WEDDING BAND: “This band — it’s a weird band. We played a wedding in Hawaii under a year ago, then we played another show at a Pipeline Masters thing [a surfing competition, also in Hawaii]. So now, somehow, we’ve become a band, which is just really fun-based. Fun is good. We love that. But it’s an eclectic bunch of songs with an eclectic bunch of men, playing a bunch of eclectic musical notes.”

In an interview with Cosmo Music, Kirk said that it’s “just really fun jamming” with his bandmates in THE WEDDING BAND. “It’s something different,” he explained. “For Rob and I, it’s cool, because we get to indulge our love of funk and punk… I was listening to all sorts of crazy music in the ’70s — a lot of funk, R&B — so I’ve always had a real appreciation of the music of that time. When I found out that Rob did, we started playing our favorite songs. Funk from the ’70s is so unique, and it’s almost a lost art because no one is writing songs like that anymore… We got together and started jamming out tunes, and it sounded amazingly good, and then we started to improvise, and it sounded amazingly good… It’s primarily a way for Rob and I just to jam out. We love to jam; we love playing with people; we love to play funk. It’s become a little bit of an outlet for us, but it’s nothing really serious or anything like that. We’re really open to anyone coming and playing with us. I even asked the other guys in [METALLICA] if they want to come by and jam. [We’re] always open — this is not a closed-border sort of band situation. Anyone can come in and play, as long as they’re good…”

He continued: “It’s so recreational, but musicians need recreational music as well. They need to play stuff that they don’t really have to worry too much about, and that we don’t have too much accountability over. It’s just a light, cool, fun thing for us, and Rob and I need that, because a lot of times, we put so much into our performance. There’s so much intensity, so much riding on having to execute this song and play the shit out of it. You’ve just got to put a lot of love and care into our band’s music, and that’s fine, and I love it — I’m super-passionate about it — but it’s also fun to just go to Disneyland for a while and play some tunes that are just fun for you to play, inspired you, make you smile, make you sweat and make you go, ‘Man, I needed that.’ I think everyone needs something like that… It’s just so fun. We’re something that’s not to be taken too seriously, because none of us want to take it that seriously.”

As previously reported, Hammett‘s “It’s Alive! Classic Horror And Sci-Fi Art From The Kirk Hammett Collection” will be on display at the Columbia Museum of Art in Columbia from February 15 to May 17.

Hammett is an avid collector of classic horror and sci-fi movie posters. This exhibition features 90 works that provide insight into the evolution of horror and sci-fi films and how they have played upon contemporary societal fears. Hammett acknowledges his poster collection as a source of inspiration for his own musical creativity. The exhibition features film posters as well as collectible electric guitars, monster masks and sculptures.

Hammett released a coffee table book in 2012 called “Too Much Horror Business” that featured photos of his extensive collection of monster and horror memorabilia.

He displayed a portion of his collection in the “Kirk’s Crypt” exhibition during the 2012 and 2013 Orion Music + More festivals. 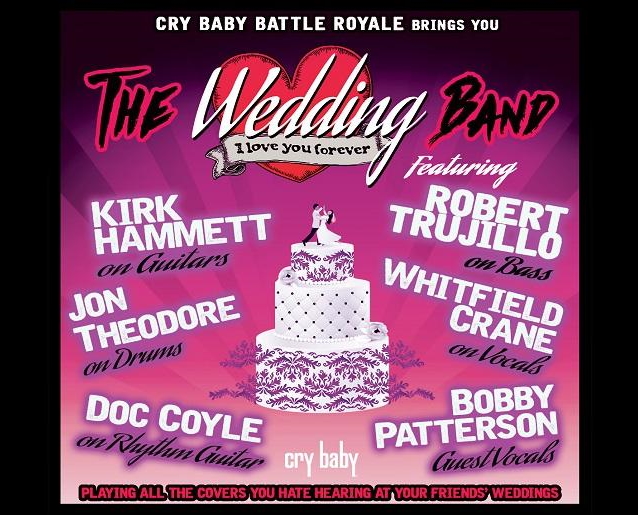