DEF LEPPARD has released a rare 1979 recording of “Glad I’m Alive” as a preview of the band’s upcoming box set, “The Early Years 79-81”, which will arrive on March 20 via UMC/Virgin.

According to Wikipedia, “Glad I’m Alive” was produced by Nick Tauber and recorded during during a session for “Wasted”, the first single from DEF LEPPARD‘s debut album, 1980’s “On Through The Night”. All four songs from the session are included on “The Early Years 79-81”, as well as a June 1979 Andy Peebles live recording of “Glad I’m Alive” from the BBC.

“The Early Years 79-81” box set represents the band’s first two albums, “On Through The Night” and “High ‘N’ Dry” (1981), and has been prepared in conjunction with singer Joe Elliott who has acted as executive producer on the set. The mastering has been done by the band’s long serving sound engineer Ronan McHugh.

This deluxe set comes with five CDs consisting of the original album remastered, B-sides, rarities and re-mix versions, Radio One sessions, “Live From Reading” and the first-ever appearance of an unreleased and newly mixed show from Oxford in 1980. These remasters have been highly anticipated, and much requested, by DEF LEPPARD fans globally.

The album also features an instant-grat track, the much sought-after Nick Tauber-produced version of “Rock Brigade”, which was originally pencilled as a single for the U.K. but was never released at the time. Today, 40 years on, the track receives its first release. Listen to the track below.

Elliott says: “Well, the fans asked, and we listened! Really excited to have our early years reworked with a load of rare material including the newly unearthed ‘Live At The Oxford New Theatre’, recorded on the 1980 U.K. tour …. It’s been a trip putting this boxset together and I hope you all enjoy listening to it as much as we did working on it!”

“On Through The Night”, DEF LEPPARD‘s debut album, was released in 1980 and immediately put the rock world on notice. The band were destined for big things with the album charting at No. 15 in the U.K. and No. 51 in the U.S. Produced by Tom Allom (JUDAS PRIEST, BLACK SABBATH), it featured many of the band’s live favourites and some updated versions of early singles. The album achieved platinum status in 1989.

“The Early Years 79-81” boxset includes a history of the band’s first two albums written by Mojo and Classic Rock writer Paul Elliott (no relation) featuring personal insights from the band on the making and releasing of those early records as well as rare photos and memorabilia.

Both albums have been remastered and will be available on 1CD version, black vinyl, and limited-edition colored vinyl.

For more details, including the complete track listing, visit DefLeppard.com. 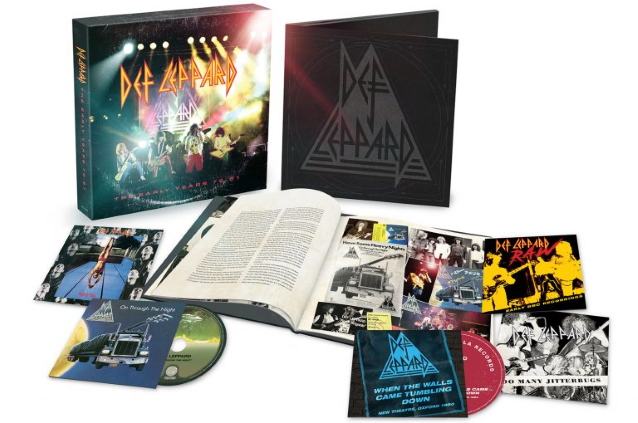