Funk metal supergroup INFECTIOUS GROOVES — featuring vocalist Mike Muir (SUICIDAL TENDENCIES), bassist Robert Trujillo (METALLICA), drummer Brooks Wackerman (AVENGED SEVENFOLD) and guitarists Dean Pleasants (SUICIDAL TENDENCIES) and Jim Martin (ex-FAITH NO MORE) — will release a special EP for Record Store Day (RSD) on October 24, which is the third and final of three separate “Record Store Drops” this year. Titled “Take You On A Ride”, the EP will be released as a 12-inch transparent orange color vinyl, mastered at 45RPM, as an RSD-exclusive release, featuring three previously unreleased songs and INFECTIOUS GROOVES‘ first new track in several years. The three previously unreleased tunes were originally recorded in 1995, during the middle part of INFECTIOUS GROOVES‘ early recording career. The tracks are titled “Funny Farm”, “Payback’s A Bitch”, “What Goes Up” and “Take You On A Ride”.

During a recent appearance on “The Vinyl Guide” podcast, Trujillo stated about where the material for “Take You On A Ride” came from (hear audio below): “I found a cassette tape that had a handful of songs that I thought were unreleased. It ended up being that a couple of ’em were released on compilations but [with] not much distribution, and then a couple of things hadn’t ever seen the light of day, and one of those was a brand new song.

“I’m pretty tight with our friends at Record Store Day, and I thought, ‘This could be interesting.’ We also had gotten an offer to [play] Hellfest in France, and yet I felt almost guilty about playing Hellfest in front of that many people and not having a new product. And I thought, ‘Well, what if I put together an EP with some of these songs that have never been released — basically, finish them, and get ’em mixed and mastered — get the artwork going and actually take this thing and get it released through Record Store Day as a special vinyl release. There’s no label, there’s no management, so there are no rules.”

Regarding how the songs were updated and reworked for inclusion on the EP, Trujillo said: “One of the tracks didn’t have the original — the drums were there and the rhythm guitars were there, but the bass was gone, and Adam Siegel, our original guitar player, his tracks were gone. So I had to basically retrack my bass and then I played his guitar parts. [That song] is more of a remix of an original version. So everything sort of stayed as planned except I added me playing the bass track as it was originally written and recorded, and then I had to play the guitar on that one too. We had found the master for that recording. That would be ‘Payback’s A Bitch’. And then there’s a brand new song that we recorded.

“It was important for me to include Jim Martin, our current guitar player, to include him creatively on this, if we could,” Robert explained. “So my goal was to release this and also be in France with the lineup — or some of the lineup — that’s actually on that record, and represent it as best as we can. One of the songs, we actually had to use the bed tracks from the cassette, because we couldn’t find the master tapes. We were, like, ‘Well, let’s throw it on to Pro Tools and use it.’ It sounded great; there wasn’t any damage to the tape. So we basically used the guitars and the bass from the cassette tape, and we tracked vocals on top of it. And then, obviously, I added some keyboards and kind of doctored it up. It was a really interesting, fun challenge, ’cause some of that music, it’s like a time capsule.”

According to Trujillo, there is a good chance fans will get to hear even more new music from INFECTIOUS GROOVES in the coming years.

“I was up in San Francisco just before the pandemic, and I had a box of cassettes and I brought a ghetto blaster down with me,” he revealed. “And I drove [from Los Angeles], ’cause I wasn’t gonna fly, so I drove down, eight hours, and I found all these cassette tapes that I would have never had the time or the stamina to listen through, and I found this missing cassette with, like, it must be 10 to 12 more songs. I was, like, ‘Oh my God! There it is!’ I thought I lost it. So there’s actually another album, potentially, that could come out.”

INFECTIOUS GROOVES was formed soon after Trujillo joined SUICIDAL TENDENCIES in 1989. Muir and Trujillo got together with some friends to write song that centered more around the bass, but with the intent of giving everyone else a whole lot of freedom.

“SEX PISTOLS and PARLIAMENT were my two favorite bands when I was young,” commented Muir. “People think they’re completely different but I saw a lot of similarities, even if musically they were categorized as completely different styles. There’s something beautiful about breaking rules that never should have been made.” 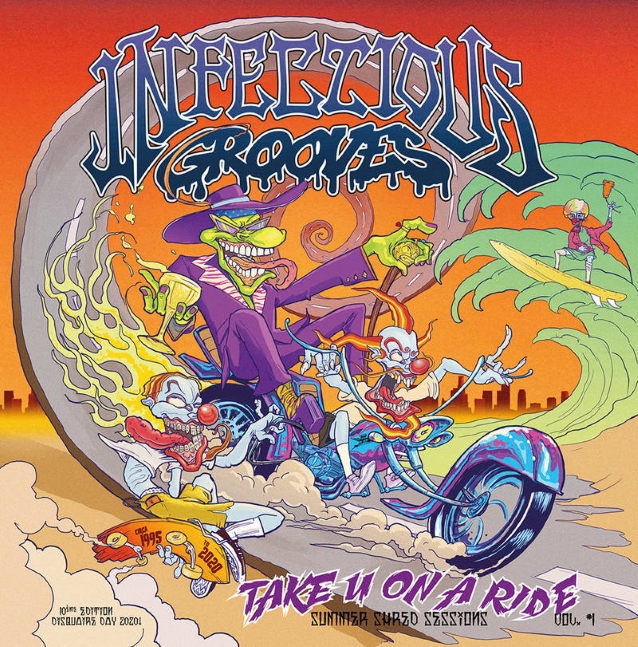