SLIPKNOT has announced the first-ever Knotfest Brasil, set to take place on December 19, 2021 at Sambódromo do Anhembi in São Paulo.

Tickets will be available from 10 a.m. Brasilia Standard Time on Thursday, November 26 at Eventim.com.br.

More than just a festival, Knotfest is an event that celebrates all cultural aspects of heavy music. Knotfest is a gathering of the biggest and heaviest bands in the world, a phenomenon created by the multi-platinum act SLIPKNOT. Launched in 2012, the festival established itself in the United States and has consistently expanded its offerings across the globe, with events in Japan, Mexico, Colombia and France.

Knotfest Brasil is the realization of a partnership between 30 Entertainment and 5B Artists+Media. In addition to SLIPKNOT headlining the inaugural Knotfest Brasil, the lineup will also feature nine other bands and 12 hours of music. The event will feature two stages, the Knotfest Museum, Food Park, and Merchandise Store, in addition to an amusement area for fans to enjoy on the day. VIP experience packages will also be available for sale, with access to premium areas and exclusive merchandise. More information about these packages will be available on the Eventim web site.

SLIPKNOT will continue to tour in support of “We Are Not Your Kind”, its sixth studio album that debuted at No. 1 on the Billboard 200 — the band’s third consecutive album to top Billboard‘s most important music chart. The album also made a global impact with No. 1 debuts not only in the United States, but also the United Kingdom, Mexico, Australia, Canada, Japan, Ireland, Belgium, Portugal and Finland, as well as Top 5 in Germany, France, Norway, Italy, Austria , Sweden, Switzerland, Holland, Poland, Spain and New Zealand.

Speaking to Rolling Stone, SLIPKNOT‘s creative visionary Shawn “Clown” Crahan described Knotfest as “a dark carnival experience. It’s not just the shows, but the environment created around it. It’s all about having fun. A day dedicated to our mentality, our ideas, to the people we want to be with. I’m talking about smells, sights, hearing, your body, everything will be overloaded with stimulation.”

Twenty-one years ago, nine inspired musicians from Des Moines, Iowa, shattered the scope of what was possible in rock music. From the moment SLIPKNOT emerged in 1999 with their self-titled debut, it was clear they were like nothing the world had seen before. Where a similarly creative act may have burned out or lost their relevance chasing mainstream acceptance, SLIPKNOT has only proven that an enduring commitment to constant evolution, their craft, and their fans can allow a rock band to not only continue — but flourish and push the envelope on what defines heavy metal and rock music in general. With “We Are Not Your Kind”, SLIPKNOT‘s first new album in five years, the band deliver when they are needed most. Meanwhile, SLIPKNOT‘s annual Knotfest festival has evolved into the biggest hard rock and metal festival in the world, expanding to four continents. Over 550,000 fans have attended these massive festivals, which are as cultural as they are music-based, mixing heavy rock with hip hop, world music, visual art, experiential installations, and much more. Recorded music and live performances aside, SLIPKNOT has always permeated mainstream culture in ways that defy expectations. Recently, SLIPKNOT partnered with Amazon Studios‘ advertising campaign for their smash hit series “The Boys”, and have launched SLIPKNOT No. 9 Whiskey in a partnership with Cedar Ridge Distillery (American Distilling Institute‘s “2017 Distiller Of The Year”). 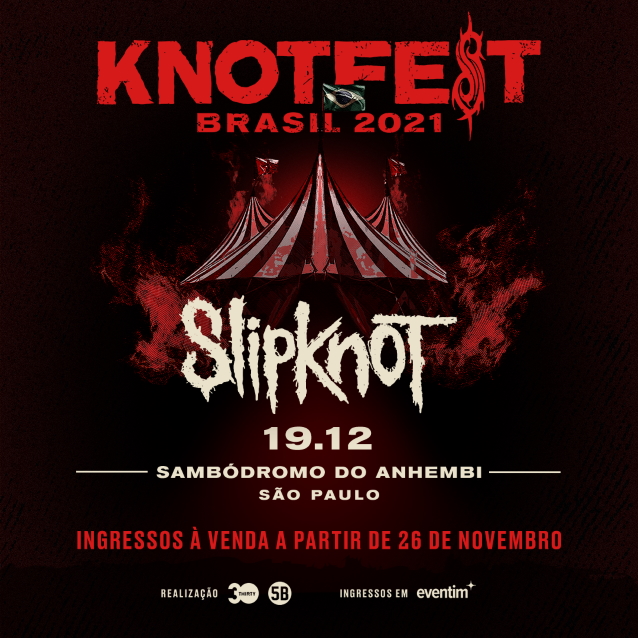