DISTURBED‘s “The Sickness 20th Anniversary Tour” has been officially canceled. The amphitheater tour, with very special guest STAIND and BAD WOLVES, was originally slated to take place last summer but was rescheduled to 2021 due to the coronavirus pandemic which is sweeping the globe.

Earlier today, DISTURBED released the following statement: “Disturbed Ones – It is with great disappointment that we must announce the cancellation of ‘The Sickness 20th Anniversary Tour’ dates that were rescheduled for this summer.

“We, like all of you, were very much looking forward to rocking out together again, after a year’s delay. We’ve waited to see if we could play the shows and by now, we had hoped there would be more clarity and a clearer direction as how to make this possible.

“Unfortunately, as the tour takes us to different cities and states with a variety of unclear restrictions, it becomes unfeasible to move forward. We felt waiting any longer and canceling last minute, especially after you all have waited this long, would be unfair.

“For those who purchased tickets, there is nothing further you need to do – refunds will automatically be issued at your point of purchase.

“We want to thank all our fans for your wonderful support, and we look forward to the time when we can all be together.

“The Sickness 20th Anniversary Tour” was supposed to celebrate the 20th anniversary of DISTURBED‘s seminal album “The Sickness”. On this tour, the band was expected to perform songs off the album, as well as tracks from its most recent studio release, “Evolution”, and its extensive catalog.

In March 2020, DISTURBED frontman David Draiman confirmed that the band wouldn’t perform its “The Sickness” in its entirety on “The Sickness 20th Anniversary Tour”. “No, we won’t do the entire album, but we’re going to do a ton of ‘Sickness’ material, deeper cuts, stuff people haven’t heard us play off the record for a while, and definitely a huge portion of material will be ‘Sickness’-oriented,” the singer told Billboard.com.

“You can’t, unfortunately — or fortunately, depending on how you look at it — as a band at our level, at this point of our career, you can’t just go out and play one record because everybody came on board at different stations,” the explained. “They want to hear what they fell in love with. There’s definitely new production elements that we’re toying with, that are elements that we’ve maybe used during ‘The Sickness’ era, but that we’re doing in a new and more provocative way. That’s about all I can say.”

In 2010, DISTURBED celebrated the tenth anniversary of the release of “The Sickness” by reissuing it with exclusive b-sides and expanded artwork, as well as a first-time-ever vinyl edition.

Released on March 7, 2000, “The Sickness” is DISTURBED‘s best-selling album to date, thanks to such hit singles as “Stupify”, “Voices” and “Down With The Sickness”. 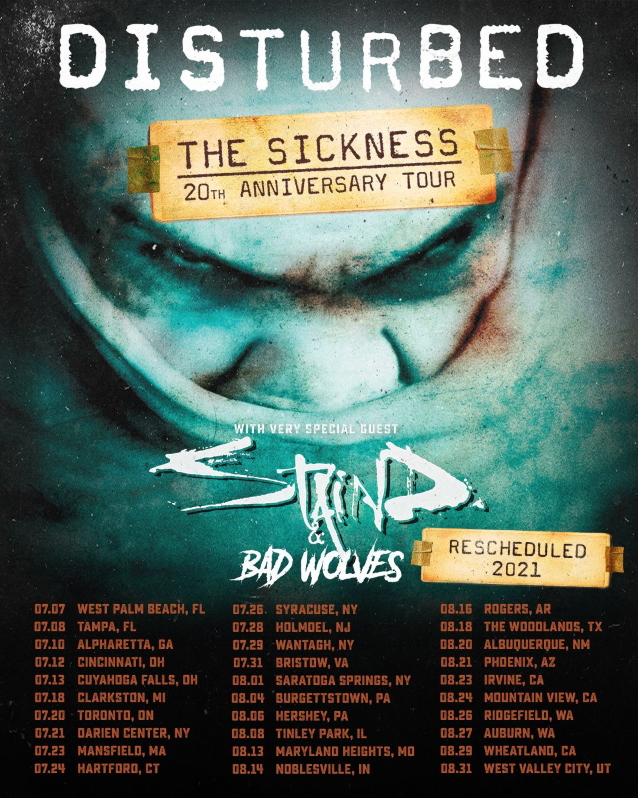