Portnoy spoke to Rudess about their renewed collaboration for a video chat that was originally uploaded to Jordan‘s Patreon channel. The drummer said (transcribed by BLABBERMOUTH.NET): “Coming back together to do the LTE sessions last summer hit on two levels. The first level was the four of us — the four of us hadn’t been in a studio together in 22 years, and the last time we made that second LTE album, our kids were just getting born, and now they’re all adults. But then there was the other elephant in the room that me, you and John hadn’t been together in, I guess, 10 or 11 years. And that was pretty surreal. But the minute we started playing, it was like not a day had passed. It just felt so natural, so comfortable.”

Regarding the songwriting process for LIQUID TENSION EXPERIMENT, Portnoy said: “Even all those years we were together in DREAM THEATER, I found the chemistry for LTE and the chemistry for DREAM THEATER, between all of us, it’s a little bit of a different chemistry too, because it’s a different way of writing and working. With DREAM THEATER, there’s vocals — you have to write with vocals in mind — whereas LTE, it’s instrumental, so it’s a whole different way of writing. It’s also very, very improvisationally based, so there’s that element. There’s also the keyboards… I think with LTE, when we did those first two albums, you were free to do whatever, and that was our chance to work with you. And it was, like, ‘Man, whatever you want, Jordan. Go for it.’ But then once you came into DREAM THEATER, it’s kind of a different formula. You’ve kind of gotta find your place; the dynamic is a little different. But the LTE dynamic is so free and open — there are no rules with LTE.”

The bonus disc includes almost an hour of improvised jams.

The album will be available as:

Speaking about why now was the right time to resurrect LIQUID TENSION EXPERIMENT, Portnoy told Revolver: “The main reason is the insanity of 2020. The pandemic and the lockdown is pretty much what allowed it. But we’ve been talking about it for many, many years. It’s been 10 years since I left DREAM THEATER, and it didn’t make sense to do LTE while I was still in DREAM THEATER. Because it was three members of the same band. Then after I left, it took many years of healing and all the drama to pass and the dust to settle before the relationships with John and Jordan got real good again. And musically, Jordan and I played together a few years ago on the Cruise To The Edge, and then obviously John Petrucci and I played together last year for his solo album [‘Terminal Velocity’]. So it seemed like the time was right to finally do it. And the pandemic, for better or worse, gave us a window of opportunity where none of us were on tour and we could actually align the schedules and do it.”

On the topic of his musical chemistry with Petrucci, Portnoy said: “Well, John and I were writing partners and producing partners for 25 years. And when we reconvened last year for his solo album, I guess I will say the difference was that the roles were redefined, because it was his album. It wasn’t like DREAM THEATER where we wrote together and produced together. When I got together with him for ‘Terminal Velocity’, I was coming in and playing a much different role, as was he. John had written it all and I was there to do a service for him. And I’m very comfortable playing that role, being a session guy or a hired gun. But then when we got together to do LIQUID TENSION EXPERIMENT a few months later, that was more of the natural chemistry of us writing together, working together, making decisions together. Once we got to that relationship, it was exactly as it had been when I left DREAM THEATER. It was just so immediately comfortable.” 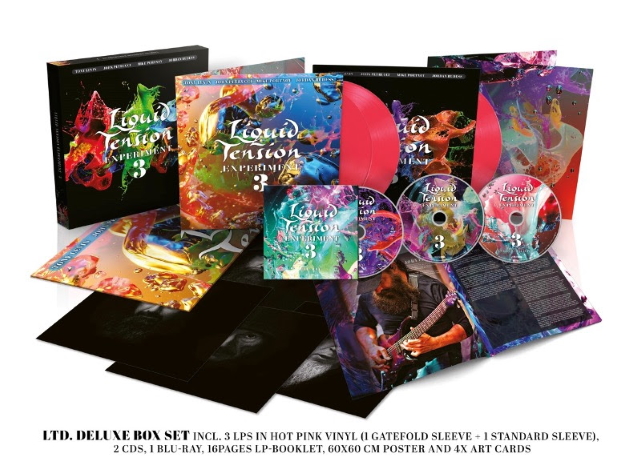