Tommy Lee narrowly avoided serious injury when he fell into his pool after walking too close to the edge.

In a video posted to social media by the 59-year-old MÖTLEY CRÜE drummer’s wife, Brittany Furlan Lee, he can be seen playing fetch with his dog around the pool of their Los Angeles home when his left foot suddenly gave out under him and he slammed hard on the edge of the pool and dropped into the water. He quickly pulled himself out and up onto the side, apparently trying to regain his composure.

Brittany, who is very active on social media, poked fun at the incident, sharing the home security video on her Instagram and writing: “When ur a witch and ask ur husband to shower but he refuses”. She then added in a caption: “Sorry @tommylee but at least ur clean now”.

When one of Brittany‘s followers asked her if Tommy was “okay”, she responded “he’s fine”. Another follower then asked if Tommy “refuses to shower”, to which the 35-year-old replied “once a week” and added a nauseated face emoji.

In the early days of MÖTLEY CRÜE, Tommy and his bandmate Nikki Sixx reportedly held a competition between them to see who could go the longest without washing, showering or bathing in any way, yet still be able to sleep with groupies without them being ill or bailing out. According to Page Six, for two months, the duo had “nightly groupie sex” with up to four girls each, until finally, a young fan performing a sex act on Sixx became violently ill on him. It later became known as “The Spaghetti Incident” because the unfortunate groupie had eaten pasta beforehand.

Tommy and Brittany celebrated their second wedding anniversary in February.

Tommy was previously married to Pamela Anderson, with whom he has two sons. This is Brittany‘s first marriage and Tommy‘s fourth. The pair started dating and fell in love in 2017.

Furlan got her start by making hilarious Vine and Instagram videos and has appeared in films like “We Are Your Friends” (2015), “Dreamland” (2016), “Random Tropical Paradise” (2017) and “The Unicorn” (2018). She also appeared in the film adaptation of MÖTLEY CRÜE‘s biography, “The Dirt – Confessions Of The World’s Most Notorious Rock Band”, which was released in March 2019.

In 2018, Tommy and Brittany appeared in Netflix‘s documentary “The American Meme”, which followed celebrity social media personalities on the ups and downs of fame in the digital age. 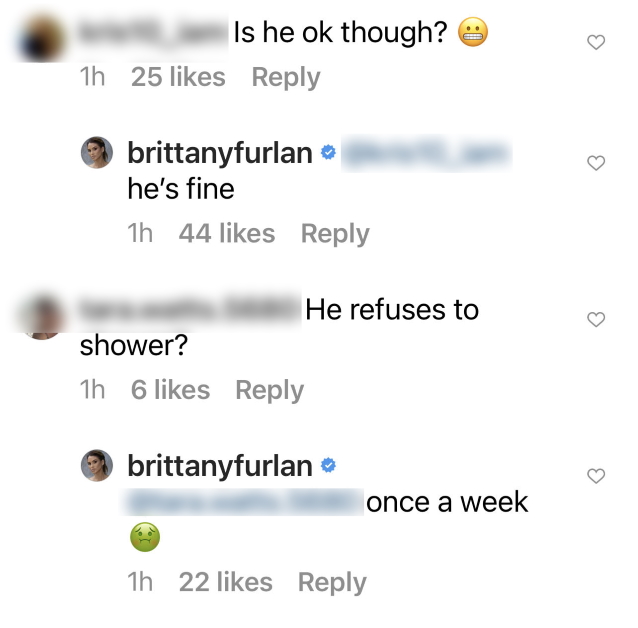