In a recent interview with the Morristown, New Jersey radio station 105.5 WDHA, BLACK LABEL SOCIETY leader Zakk Wylde stated about the writing process for “Doom Crew Inc.”: “The way it always goes, it’s always the music first and then a melody. And then I’ve gotta find out something I wanna sing about. So then I’ll write the lyrics. That’s usually always the way it goes. And then, when it’s all done, then the solos go on it. The painting’s all done, and the solo is the frame that goes on the thing. So you can sit back and look at the whole thing. That’s the way we pretty much always do it.

“We did the box set, and then we did videos for that, and then, after that, [my wife Barbaranne] was just, like, ‘Maybe you guys can do a record,'” he recalled. “I said, ‘All right. No problem.’ So I said, ‘How long till the guys come out?’ [She said], ‘You’ve got a month till the fellows come out.’ So I was just, like, ‘All right. Let me get started.’ So I would just have a cup of coffee and just start writing riffs. You always get inspired by — for me, it’s always Mount Riffmore, which is CREAM, MOUNTAIN, [LED] ZEPPELIN, [BLACK] SABBATH, DEEP PURPLE… If you’re not getting inspired by the riffs those guys have created, it’s just like… So I’ll just go fishing and just start writing till you get to something you like.

“What we ended up doing [was] tracking about 30 songs and then whittled it down to the 12 that we have [on the album],” Zakk explained. “It’s funny, ’cause the ‘Farewell Ballad’ thing has been sitting around on YouTube for probably about 11 years or something like that — just that instrumental strip of music. And so I was just, like, ‘You know what? Let me just get around to finishing this thing.’ ‘Cause we had that bit of music, the chord progression that I wrote. So then I just finished it — I just wrote a melody, I wrote a song with that intro. So we finished that thing. And then ‘Love Reign Down’, the piano ballad, that was sitting around. I wrote that about my mother who passed away. That was during [the making of Ozzy Osbourne‘s] ‘No More Tears’, actually. I remember noodling on the piano at A&M and I wrote that song. So it was good to actually finally put that on an album. But the rest of it is all brand new. ‘Set You Free’ was pretty much right at the end, when we were tracking everything else. So that definitely popped in there late at the end of the whole thing. But the album’s probably almost about a year old now, since we recorded it and finished it and mastered it and everything like that. But it’s just been sitting in the can until right now.”

“Doom Crew Inc.” will be available digitally on CD and vinyl plus a deluxe edition that includes vinyl, CD longbox, cassette and more. The 12-track album is both a tribute to the band’s “first to bleed, last to leave” road crew and a salute to the legion whose support, stretching back to 1998, rivals that of the KISS Army.

The songs are odes to celebration and mourning, the soundtracks to jubilant evenings and bewildering days recorded in Wylde‘s home studio, the Black Vatican. On this album, Zakk trades solos and twin-guitar parts with Dario Lorina, backed by the rumble of longtime bassist John “J.D.” DeServio and powerhouse drummer Jeff Fabb.

BLACK LABEL SOCIETY kicked off the “Doom Trooping Over North America” tour on October 1 in Sacramento at Ace Of Spades. The trek, with openers OBITUARY and PRONG, will run through November 28, ending in Albuquerque at the Sunshine Theater. The band will then finish up the tour from December 27-31 with PRONG and ARMORED SAINT. 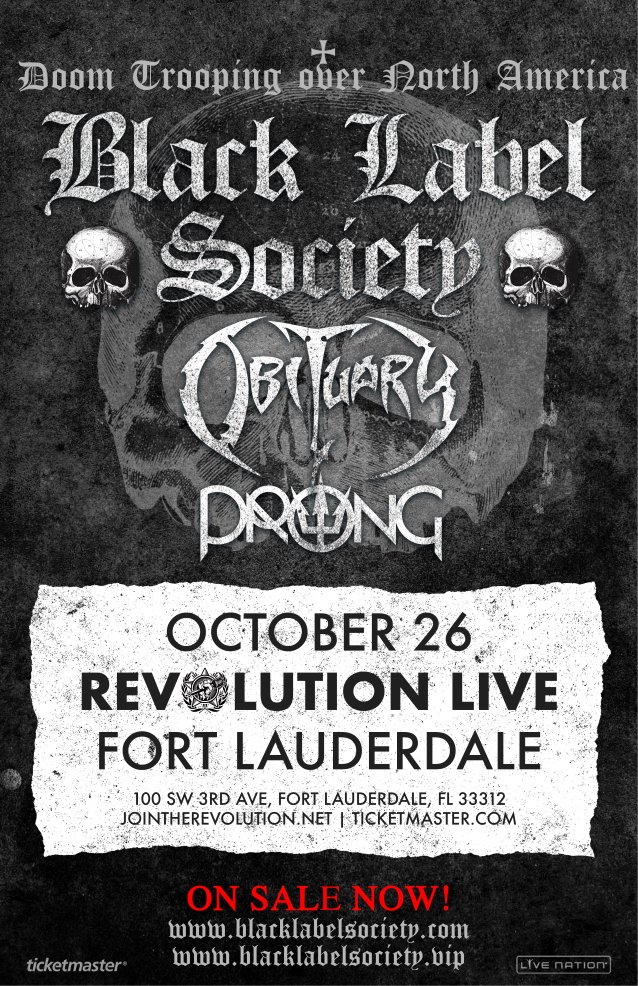