VANDENBERG‘s new lineup made its live debut last night (Friday, November 12) at the Planet Rockstock festival in Trecco Bay, South Wales, United Kingdom. Video footage of the concert can be seen below.

Last month, VANDENBERG recruited Mats Levén as its new lead singer. The powerhouse Swedish vocalist is known for his work with Yngwie Malmsteen, CANDLEMASS and tours with TRANS-SIBERIAN ORCHESTRA, among many other bands.

VANDENBERG guitarist Adrian Vandenberg commented: “To say I’m excited about working with Mats Levén would be an understatement. It’s a huge privilege to work with a vocalist of Mats‘s world-class calibre, who’s just as passionate about kick-ass rock and as motivated and dedicated as I am. A one-of-a-kind signature voice, commanding stage presence, very experienced but as far from running on automatic pilot as humanly possible and a great guy.

“Mats and I are working on our new songs for the next VANDENBERG album as we speak. We’re pushing and inspiring each other to keep raising the bar and are coming up with great, very exciting stuff.”

Mats says: “I’m thrilled to join VANDENBERG and to be recording the new album. I’ve been a fan since the ’80s, and I’m honored to be soon sharing the stage with my Dutch amigos.”

“I believe the vibe we have with this turbocharged lineup is wonderful,” concludes Vandenberg. “We are not at all a nostalgia act, trying to recreate what happened all those years back. This is a brand-new dynamic band with a name that has a legacy, and I couldn’t be happier with the way it’s turned out.”

Led by master guitarist Adrian Vandenberg, the Dutch foursome released three quality albums during the early to mid-’80s, namely, the self-titled 1982 debut (spawning the U.S. hit single “Burning Heart”), “Heading For A Storm” (1983) and “Alibi” (1985). They achieved commercial success and earned much acclaim. The band toured the U.S., Japan and Europe playing with the likes of OZZY OSBOURNE, KISS, RUSH, SCORPIONS, MICHAEL SCHENKER and more.

Last year, VANDENBERG released a new studio album called “2020”. The LP featured Chilean-born Ronnie Romero on vocals, a singer who forged a formidable reputation over past years with Ritchie Blackmore‘s RAINBOW. There were also two celebrated guests on the album, namely bassist Rudy Sarzo (WHITESNAKE, OZZY OSBOURNE, QUIET RIOT, DIO) and drummer Brian Tichy (WHITESNAKE, OZZY OSBOURNE, FOREIGNER, BILLY IDOL). While nine of the songs were freshly written by Vandenberg himself, there was also a new rendering of “Burning Heart”, perhaps the band’s most famous anthem.

Vandenberg has had an impressive career. He was a member of WHITESNAKE for 13 years at the height of their fame, contributing the solo on their No. 1 hit “Here I Go Again”. He spent many years duelling with Steve Vai on guitar and has returned for many reunions. He was part of supergroup MANIC EDEN, and more recently released a number of albums with VANDENBERG’S MOONKINGS.

Vandenberg previously said about Van Der Elsen and Herfst‘s additions to VANDENBERG: “Koen has been voted Holland’s best hard rock drummer now for several years. He has the sort of fire in his belly that would make any greats such as John Bonham and Ian Paice smile. Randy was highly recommended to me and has a lot of experience. Like Koen, he is a brilliant musician.”

Amigos! We couldn’t have wished for a more heartwarming ‘Welcome back you Dutch/Swedish fuckers’ than the one we got treated to by our English friends at the Rockstock festival last nite! Our VERY FIRST TIME ONSTAGE TOGETHER as a band! Thanks so much to promotor Jon and his great crew for taking such good care of us and the fantastic rockin’ crowd present for an unforgettable night! Right now we’re having a modest afterparty at Brighton airport, even though the coffee doesn’t exactly have the same bubbly festive vibe as the royally flowing champagne in our dressing room after the show..?But as always: a party is a state of mind! Have a great weekend you guys!☠️? 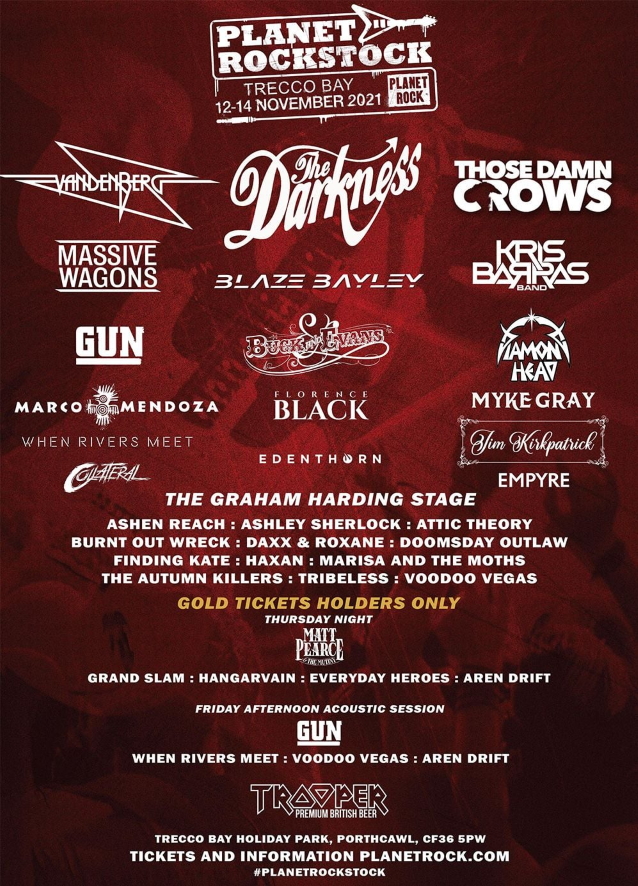