AARON LEWIS Accuses Democratic Party Of Being Responsible For 'Systemic Racism' In U.S., Admits He Will Get 'Fact-Checked'

STAIND frontman Aaron Lewis has once again accused the U.S. Democratic Party of being responsible for the “systemic racism” that exists in the country.

The outspoken conservative rocker, who reinvented himself as a solo country artist in the last decade, voiced his views before performing his new single called “Am I The Only One” during his December 9 concert at Martin Woldson Theater at the Fox in Spokane, Washington.

He said (as transcribed by BLABBERMOUTH.NET): “I’m gonna be 50 in April. So I’ve been around the block a couple of times and I know what’s truth and I know what’s bullshit. And really what the Democrats are asking me to do right now is to forget the last 45 years of my life and only remember the last five. And I’m sorry — I can’t do that. I know the truth. And something tells me that everybody in this room knows the truth too.”

Lewis paused before continuing: “Well, that was pretty good. I got through that one with a ‘G’ rating. I might not be in trouble tomorrow for that one. That was pretty gentle.” He then quickly changed his tone, adding: “Fuck that! The Democrats did it all. They did. Go find an old history book — an old one, before they got a hold of it. ‘Cause I remember history. I liked history class. I paid close attention. I know who owned the slaves. I know who started the KKK. I know who voted in all the Jim Crow laws. And I now know that the same fucking people are trying to teach our children to hate each other for the color of their skin. Same folks. Same folks.

“There’s your systemic racism throughout history of the United States Of America — it’s the Democratic party,” Aaron said. “And that’s the truth. And they’ll fact-check me and crucify me tomorrow for it. But that’s okay. Because the truth shall set you free, motherfuckers.”

In recent months, Lewis has repeatedly accused the Democratic Party of fighting against every major civil rights initiative and of having a long history of discrimination.

According to a “fact-check” article that was published by USA Today in June 2020, historians agree that although factions of the Democratic Party did majorly contribute to the Civil War’s start and the KKK‘s founding, it is inaccurate to say the party is responsible for either.

As the Democrats introduced policies to support voting rights, it became the favored party for most black voters and has remained so since. With that realignment, many racist voters who opposed the Civil Rights Act of 1964 left the Democratic Party to become Republicans.

Lewis, who is widely considered to be one of the most politically conservative musicians in rock, made headlines in September when he urged his fans to chant “Fuck Joe Biden” during a STAIND concert in Pennsylvania.

Aaron told the Anchorage Press in a January 2020 interview that he considered the first Donald Trump impeachment by the House Of Representatives as the clearest representation of what’s wrong with America these days.

Lewis was a staunch critic of President Barack Obama, telling a crowd at one of his solo concerts in 2016: “Barack Obama should have been impeached a long fucking time ago. Every fucking decision he makes is against the Constitution, it’s against what’s good for our fucking country, and he is truly the worst fucking president that we have ever had in the history of this fucking country.”

That same year, Lewis told Billboard that he would support Trump in the U.S. presidential race, even though he was “disappointed” by the real estate mogul “with the bickering and the name-calling.” Lewis added that he voted for Senator Ted Cruz, Trump‘s closest competitor in the Republican nomination race, in the Massachusetts primary. 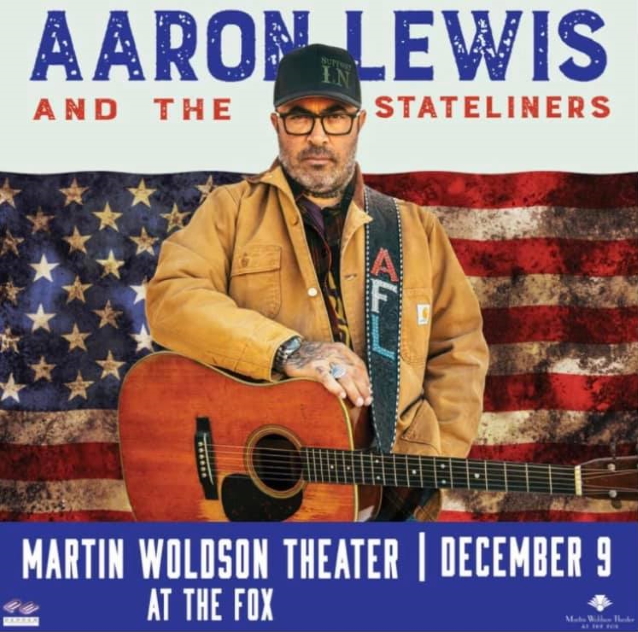