Part two of a new documentary celebrating the 15th anniversary of ALL THAT REMAINS‘ breakthrough album “The Fall Of Ideals” is available below.

“The Fall Of Ideals” was reissued last November. The best-selling title features such fan favorites as “This Calling”, “Six” and “The Air That I Breathe”. In addition to the wide release, the band has exclusive colored vinyl variants with deluxe packaging available only at the band’s webstore.

Originally released in 2006, “The Fall Of Ideals” launched a new era for ALL THAT REMAINS — finding the band moving away from the death metal of their first two albums (2002’s “Behind Silence And Solitude” and 2004’s “This Darkened Heart”) and settling into the melodic metalcore that defined their career. “The Fall Of Ideals” also introduced fans to the band’s longtime bassist Jeanne Sagan and marked their only album to feature drummer Shannon Lucas. The newcomers joined founding members Phil Labonte (vocals) and Oli Herbert (lead guitars), as well as rhythm guitarist Mike Martin.

In the studio, the Massachusetts quintet partnered with two prominent metal artists: KILLSWITCH ENGAGE‘s Adam Dutkiewicz, who served as producer, and SOILWORK‘s Peter Wichers, who engineered the sessions. The dynamic, 11-song set found the musicians pushing their sonic boundaries, while Labonte showcased his broad vocal range — from epic, extended screams and in-your-face growls to emotive choruses. The album spawned a variety of enduring favorites, including the hard-driving “This Calling”, which featured in the soundtracks to “Saw III” and “Masters Of Horror II”, as well as singles “The Air That I Breathe” and “Not Alone”. Other highlights included the guitar-forward “Whispers (I Hear You)” and the dramatic “Six”, which appeared in “Guitar Hero II”.

Upon its release in the summer of 2006, “The Fall Of Ideals” was embraced by fans, becoming the band’s first album to break the Billboard 200 (peaking at No. 75) and eventually selling more than 450,000 units. The album also caught the attention of critics. Pop Matters hailed, “ALL THAT REMAINS has made the kind of stylistic leap that most bands can only wish they could pull off… ‘The Fall Of Ideals’ [is] invigorating from start to finish, and could very well be the metalcore album of the year.” BLABBERMOUTH.NET praised, “ALL THAT REMAINS effortlessly blends thrashy twin guitar fireworks and Phil Labonte’s raging vocals with soaring clean vocals and overall tunefulness…There is no denying that those guys play their asses off here and the result is immensely gratifying.” Lambgoat simply declared, “The entire band executes the songs perfectly,” adding that “the production…is full and crisp.”

“We’re so thankful to everyone who has kept this disc in their hearts for the past 15 years,” said Labonte. “We are proud to celebrate the reissue and can’t wait to tell you about all the other cool things we have in store.”

In the 15 years since “The Fall Of Ideals”, ALL THAT REMAINS have built an undeniable legacy as one of this century’s most consistent purveyors of heavy music with a bulletproof canon of arena-worthy anthems. Currently consisting of Labonte and Martin, as well as drummer Jason Costa, and lead guitarist Jason Richardson, the band continues to defy the odds of its genre. To date, they have sold more than a million albums worldwide, earning five consecutive Top 10 debuts on the Billboard Top Rock Albums chart, and boasting more than 1.5 million monthly listeners on Spotify — an unprecedented feat for any metal band. In 2018, ALL THAT REMAINS released their widely acclaimed ninth studio album, “Victim Of The New Disease”. 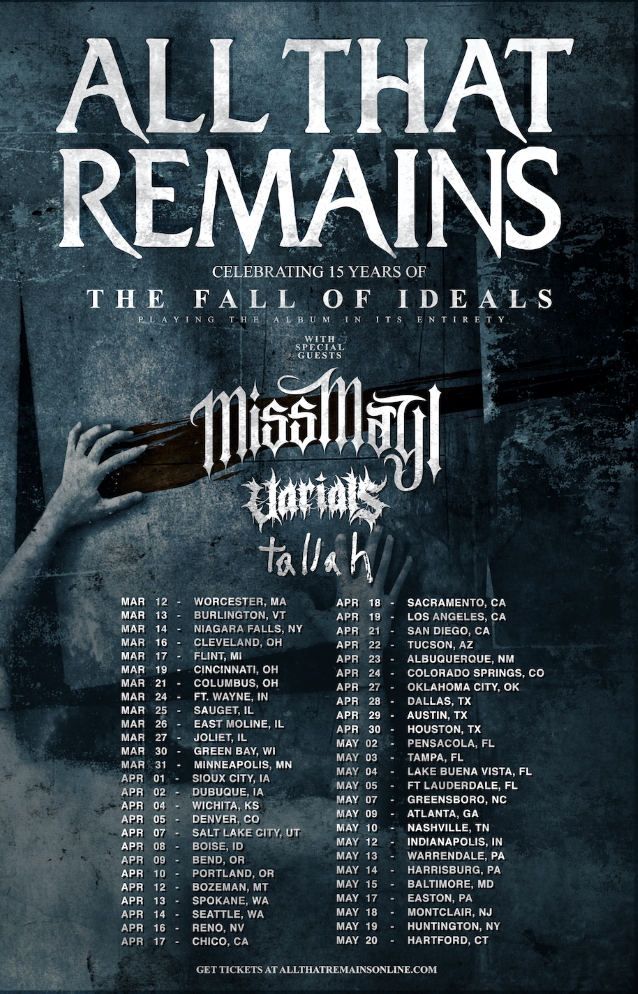